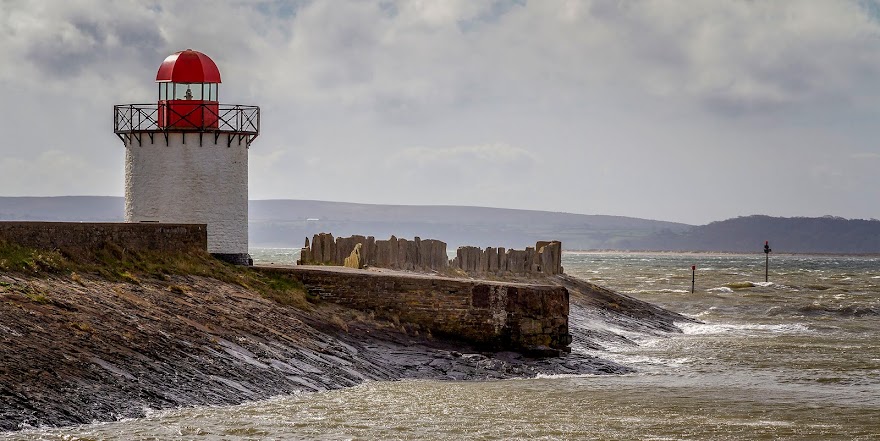 It's a swift one today, I haven't been at all well the past couple of days - I don't know how much visiting I'll be doing either. Maybe it'll happen at the weekend. 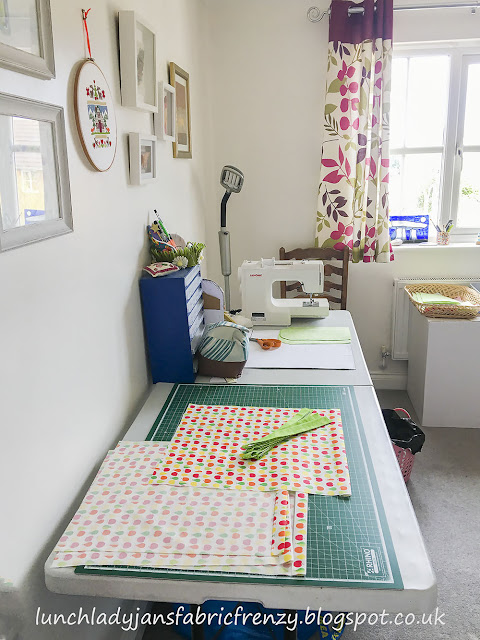 I had been doing some sewing over the weekend, here's some tutti frutti with green handles etc. 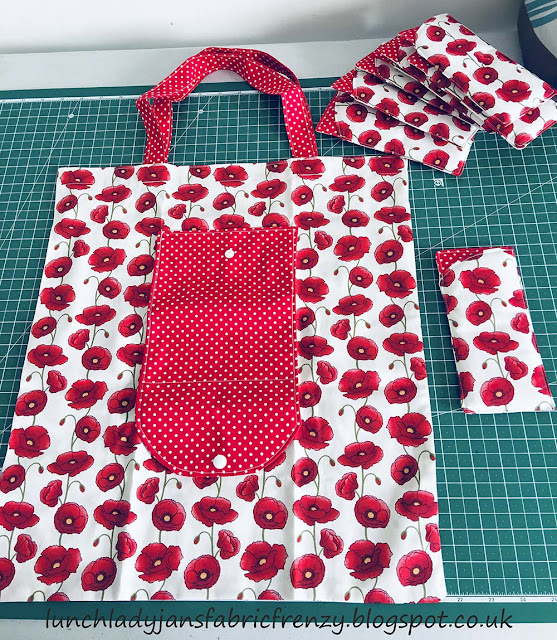 The new poppy has turned out rather well, better than I'd thought. I've used all the fabric up. 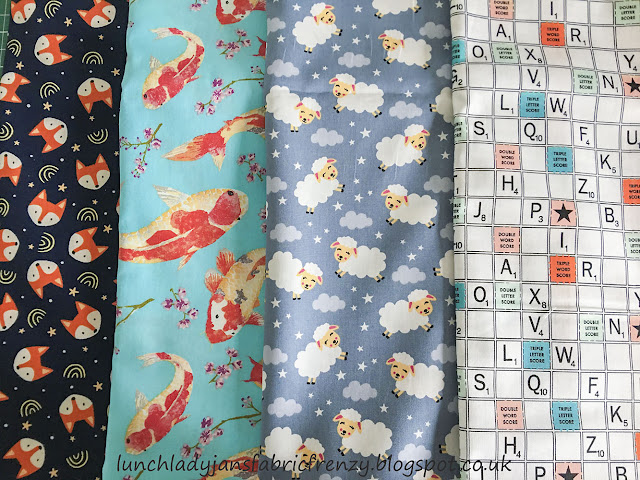 A new delivery from Doughty's, replacing the fox and Koi carp and trying something a bit different with the sheep and the 'Scrabble'. It'll be fun to see how they turn out as well!

Down in our little town, there was an unappealing alley down the side of a pub, the landlord paid out of his own pocket to have two murals painted by Jenks, a local street artist. It's great fun! 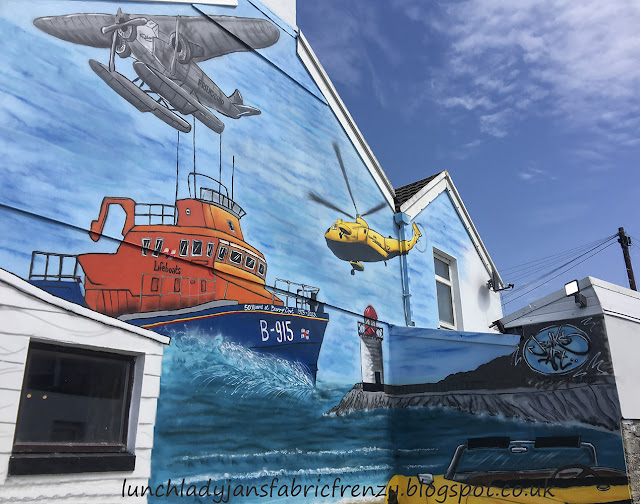 This features our lighthouse, the RNLI, Amelia Earhart's historic plane flight (which landed here in the 20s, the crew thought it was Ireland!) and you can just see the yellow car bottom right of frame which is the landlord's pride and joy!

There's another further down the lane: 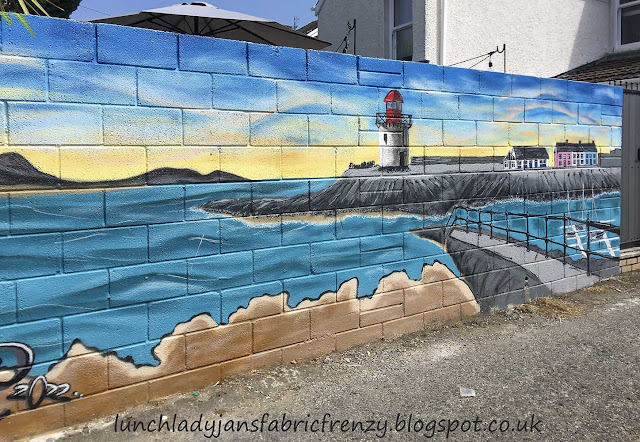 With a view of the harbour looking over to Gower. It has really cheered up a tatty back lane, well done to Mal, the landlord of the Portobello, whose idea it was.

Have a good week, I'm hoping I'll be on the mend soon. xx

oh Jan I do hope you feel better soon! I love the new fabrics, that scrabble one is fun. I love the street art, they look amazing and so much nicer than boring walls! Take care and feel better xx Helen #?

Hope you are feeling fit soon Jan - don't worry about visiting just get well. The scrabble fabric looks cool and those murals are fabulous - what a nice landlord. Stay safe and Happy WOYWW. Sarah #?

The murals are really great.

Goodmorning Jan. I do hope you feel better soon, so you can start using that fabric as you do so well! I use the spectacle-case you made for me years ago a lot these days, as it holds my sunglasses. Still love it a lot! (it's a blue/purple one with giraffes... remember?) Hug from Holland. Marit #4

Hope you feel better soon Jan. Your fabrics are lovely and the mural is fab.
My mother-in-law, Rene, was there for Amelia Earhart’s landing but she mainly remembered being allowed to wear her patent leather shoes despite it not being a Sunday!
Take care and happy WOYWW
Hugs
Lynnecrafts 6

I'm so sorry to hear you are feeling rough Jan, I hope you are soon feeling a lot better. The murals are amazing - what a wonderful idea and what a skilled artist. The tote bags are looking good - I love the lime green with the tutti frutti, what a beautiful summery combination!
Take care, sending lots of love and hugs your way,
Diana xx #13

I am sorry to hear you have been poorly, wishing you well again. The murals are fabulous.and such a great idea. Happy WOYWW. Angela #10

Aww LLJ - I am sorry to hear that you are under the weather. If you can and want to please drink some Celery Juice at the morning - 12 - 16 oz if possible. I know for sure that will help you a lot. I do that each day. I love your creativity and are kind of envy because I want to do that too .. lol but the difference between the artist are a great thing.
Thinking of you, dear

Sorry to hear you've not been well, mild Covid attack????
Love your new fabric and those walls down the alleyway . . . . all I can say is don't let the Parisians know they have competition!!!
How do you say Belleville in Welsh lol
Take things easy and get properly well.
Love to you both
Christine #21

Dear Jan!
Send you a big hug from Austria!
Get well soon my busy bee....
The fabrics are great! Cool idea the one with scrabbles.
Oh - and the murals - better with color.
Best wishes
Eva

Hope you're feeling better soon. You just take it easy. I absolutely love the murals they are spectacular. Wishing you a very happy and creative woyww, Angela x12x

Beautiful fabrics, Jan! Love what you made with the poppies! The murals are amazing as well - so much nicer than graffiti. Hope you feel better soon. xx zsuzsa #20

Sorry to hear your feeling poorly...hoping your better soon. Lots of R and R needed. The murals are stunning...well done to that man.
Hugs,
Annie x #7

So sorry you’re poorly, not like you so you must be feeling a bit bloody. Liking the new fabrics, of course the scrabble tiles appeal straight away. I bet the poppy bags go in a flash, they are perennially popular. Pardon my pun, it’s a weak one. I love the Muriel’s, what a great idea, very community spirited if the landlord and omg, can you imagine being faced with a blank wall like that…I might be ok with ideas for it, but the scale of it gives me right old blank page syndrome. Feel better soon. Would it help to remind you that there’s only a week to go?!

I really hope you feel better soon, More great fabric and love the murals they are lovely

I hope you feel 100% soon!
Love the murals!! Definitely better than a dull wall!
Great bags, love the poppy print one!
Hang in there!
Carol N #22

OOh hard to say which I like best - your fab sewing or those stunning (and meaningful) murals. Fabulousness all around!

Late again so dashing off to get round all desks TODAY
Happy WOYWW next-day!
Mary Anne (2)

Hi Jan,
Am praying you’re picking up, just was praying and thought must let you know!
I could leave a message after all in Christines website, as found on another webrowser..DuckDuckGo in iPad with anonymous comment I could comment.
It by passed sign in, so left her some love.. only found out tonight it’s very late here, I must get back to prayer but sorry forgot to share your precious atc on my post… totally fell out my head!
God bless and keep you safe, Shaz. Xx🙏🙏❤️❤️🙏❤️🙏

Aw sweetie, I hope you feel better soon.
Your lyrics definitely perked me up and reminded me of nights at Cinderella's (Mumbles Pier Nightclub) when I was in Swansea Uni. Me and my friend would share a lemonade and dance the night away. Sigh.
I digress, loving the poppy bag and those murals are super fun.
Hugs BJ the super late this week #24

Just so you know, I was totally inspired by your desk above and have had my poppy fabric out today and will show my Saturday sewing desk on Wednesday (better than boring old tidy as usual desk each week and forgiven by the fact that yours inspired me) Happy dance, must go do some Hebrew and play my harp.... Hope you're feeling better sweetie, hugs BJ#24

OOPS, I DID IT AGAIN.... It's going to be a super speedy whizz through my desk today - after not seeing Lynne and hubby for three years... 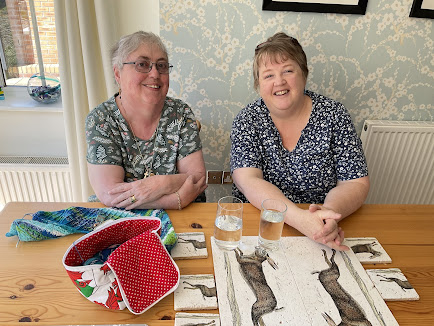