Here we are on the Big Day!  It's been a really busy month filled with lovely goings-on but I am going to have a good break for a few days. The tuba is packed away, the Christmas music is back in its folder and I am going to enjoy a couple of whiskies!!

I have tried to decorate my house elegantly but what can you do when your menfolk do this: 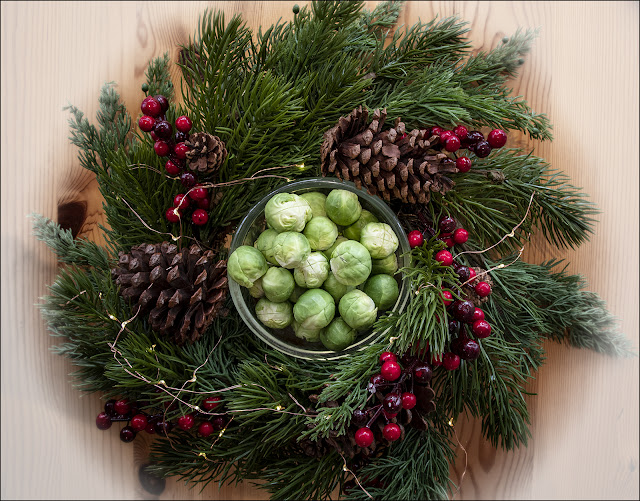 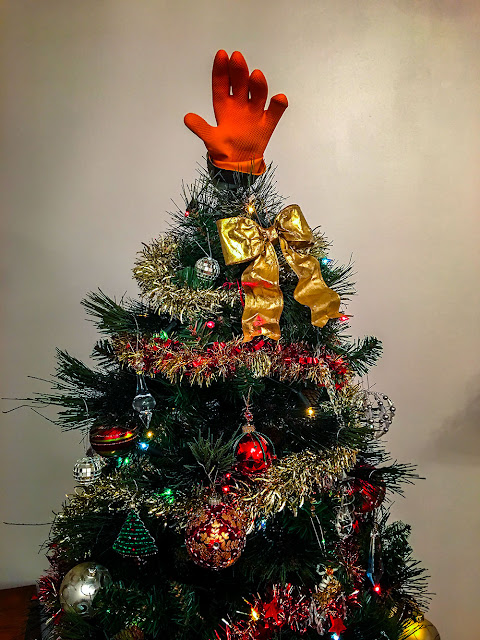 You can probably work out who did this!! Lol. It shall stay there for the rest of the festive season as it makes me laugh!

Hope you have a marvellous day - thank you for all the desky fun and crafty shenanigans this year. I'm looking forward to the programme featuring my band this evening. If you watch it, hope you'll see why I adore playing in a brass band xxxx

SO HERE IT IS, MERRY CHRISTMAS,
EVERYBODY'S HAVING FUN!

It's the final run-up to Christmas and suffice to say, it's been a busy one. I have four more gigs to play and then I'm done! The Christmas parties and get togethers have been brilliant, it's been such a laugh and I am so lucky to have some truly wonderful friends.

Janet from WI came over last week and we had a very happy morning making table decorations for the Christmas party which was yesterday. We amassed a whole lot of stash and recycled ornaments between us and set to with a hot glue gun each! 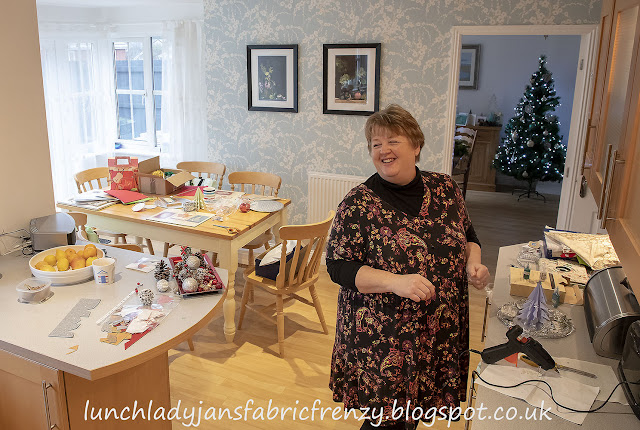 It was Christmas carnage in the kitchen! 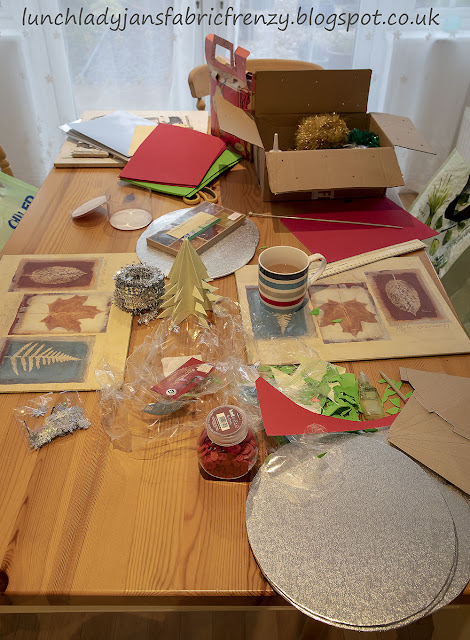 The only thing that was new were the cake boards. 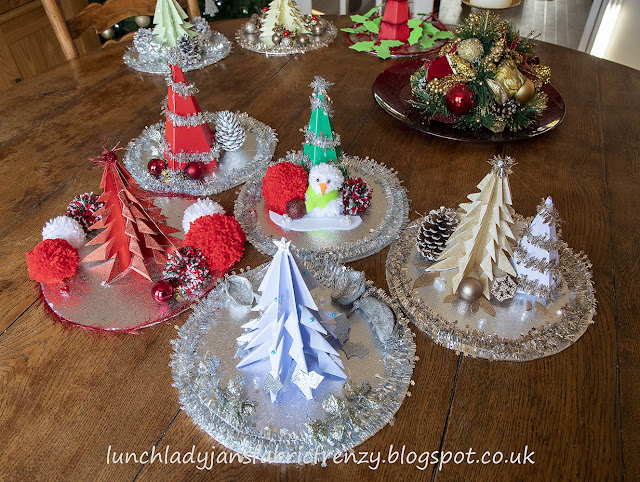 Every time one was finished it went on the dining room table - these are mine. 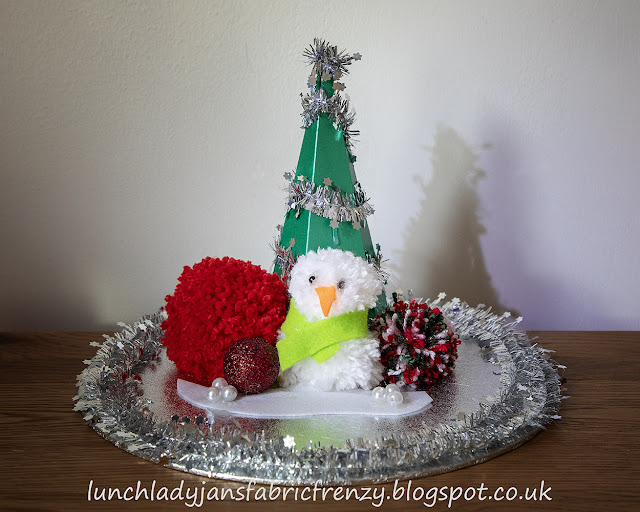 The pom poms were fun and the origami trees worked really well... 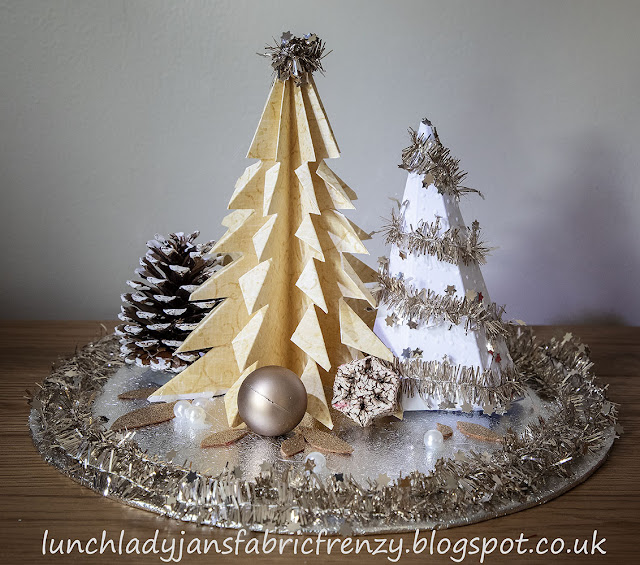 But this was my favourite!  Being good recyclers, we'll keep the cones, baubles and boards and see what we can come up with next year, lol!

Don't mess with us crafting gals!! 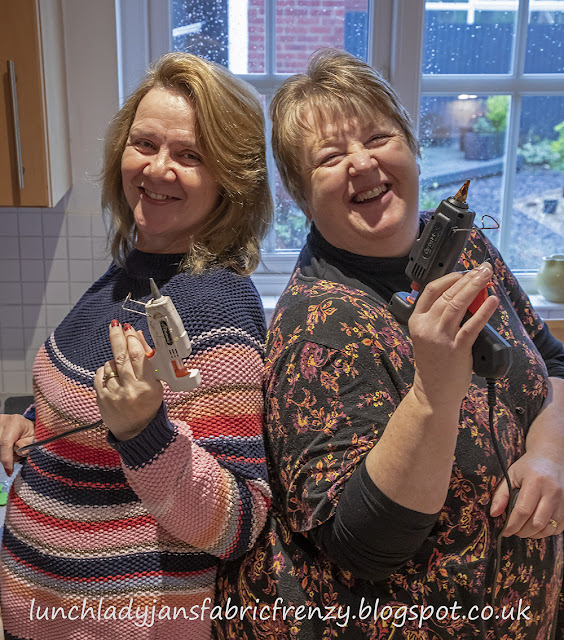 We've got a hot glue gun and we're not afraid to use it!!!

I made a hanging for the WI Christmas competition and showed you the start a couple of weeks back - well, against some very stiff opposition, I won! 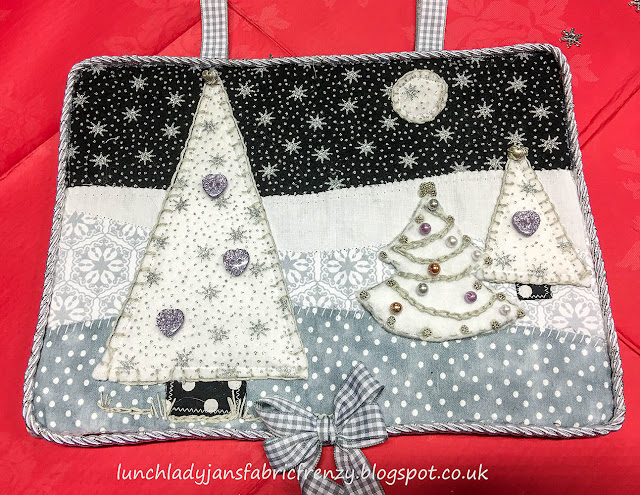 I had such good fun with this - it just came together in a couple of hours. I put it into the raffle and someone snaffled it up which was lovely.

I have been out playing carols a lot too - we were in Tesco on Saturday: 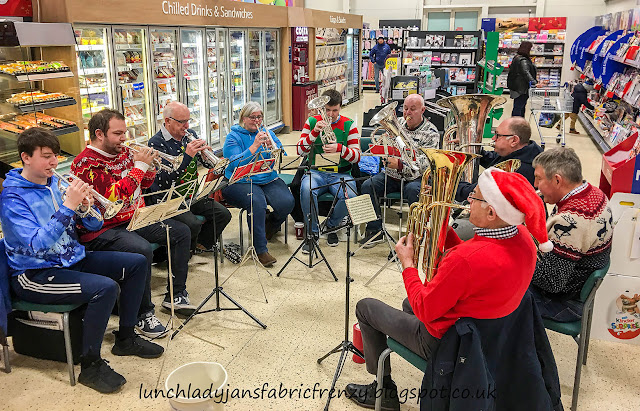 This was the morning group just finishing - I was in the 1-3pm section. We collect for the band funds doing this as it takes some cash to keep an organisation like ours going.
The S4C programme about the band and how we support the community at Christmas is going out at 9pm on Christmas Day. S4C can be found on Sky, Virgin Media and Freesat if you're interested. They focussed on the Welsh speakers and the family members but you may see me in the background hiding behind my tuba, lol!

Have a lovely week and if you don't post next Wednesday, may I wish you and your family a Happy, Healthy and Craft Filled 2020. xxxxx

Life continues to whoosh by - much like the weather this past couple of days! The one good thing about it being stormy all day yesterday is that I spent quite a lot of it crafting :-) 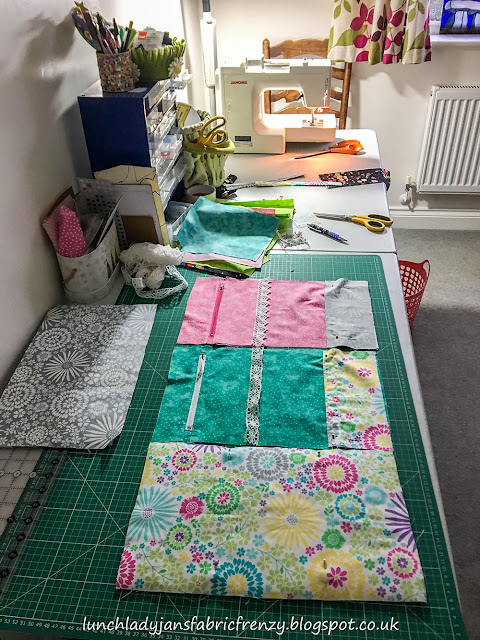 This was the desk yesterday morning at 10 - it was so dark I had to put the lights on to see what I was doing!  I'm catching up on a couple of late items and have a production line going. 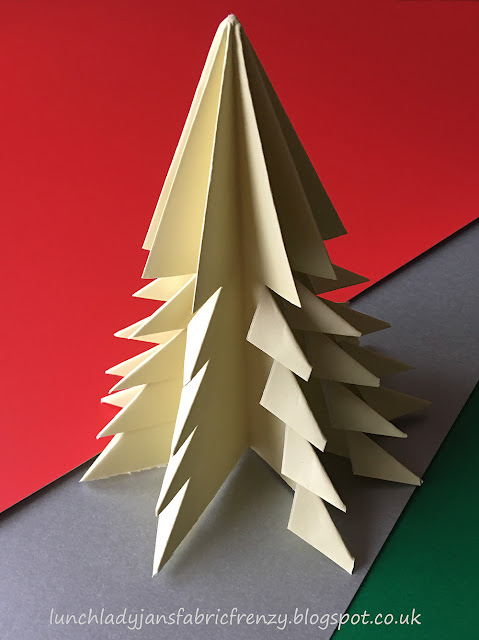 Tomorrow will see me making some more origami Christmas trees with some help from Janet, my WI mate, We'll be making table decorations for the WI party next Tuesday. 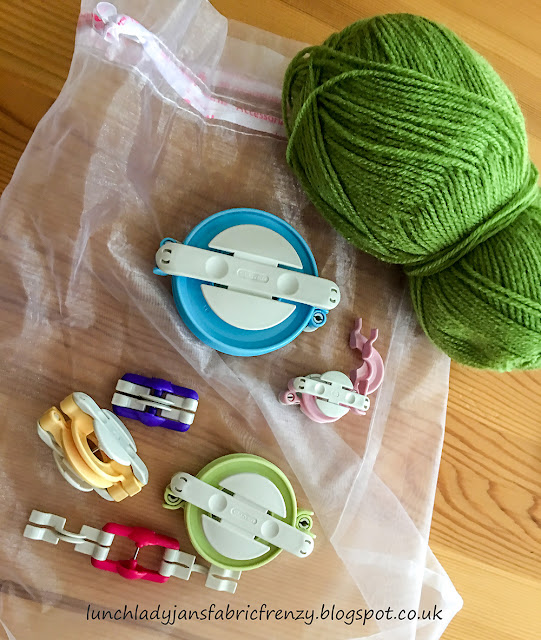 And my good mate Helen turned up trumps when I needed a few different sizes to the Clover makers I already have. I'm very lucky to have friends who are willing to make/create/bake at the drop of a hat.

Carmarthen is my local town and the shopkeepers have done some great windows - just up the hill from the book Christmas tree is a cafe featuring this: 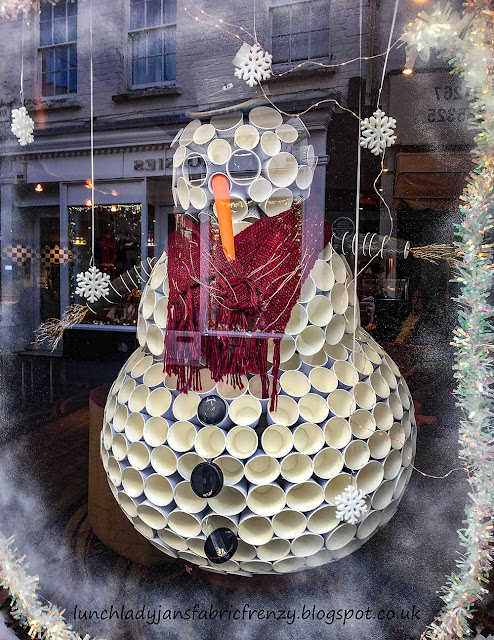 Fun huh? And all recyclable cups too :-D

My eldest son sent me this pic of his decorating - he said he had no baubles and had run out of space to dry his washing hence: 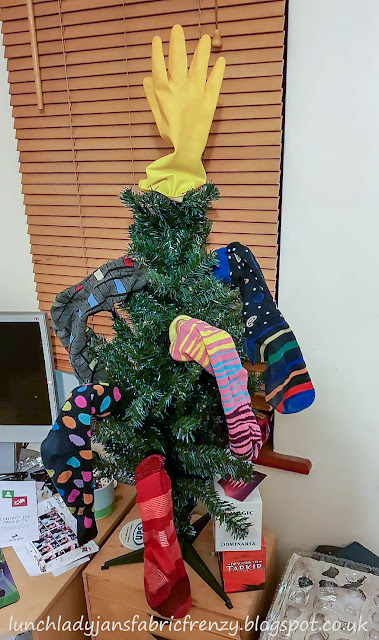 I am out all day and playing carols this evening so I may be very late commenting, apologies.

This is one of my all time favourite Welsh carols - I'm a sucker for a good minor key and mournful sound, that's my Welsh blood coming through!

Anyway, the festive season has well and truly begun here at LLJ HQ....I've already been out playing five times since last week, two of which were covered by the television cameras. It's going to be interesting to see the final programme.

No desk as such today, but yesterday saw me at the WI Craft Club where we made willow stars. Janet demonstrated what to do: 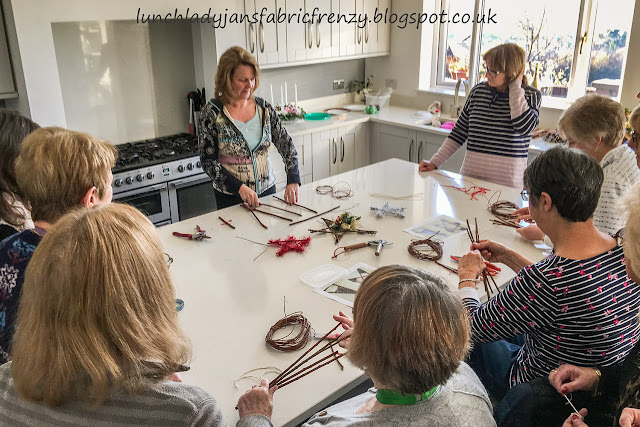 You've never felt such concentration from us girls, lol! 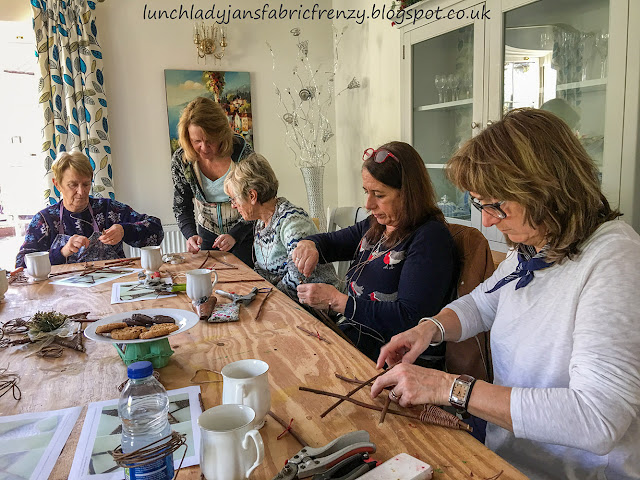 Then we set to - it was really good fun, we all enjoyed though there was the occasional bit of swearing as a bit of willow pinged across the room!! 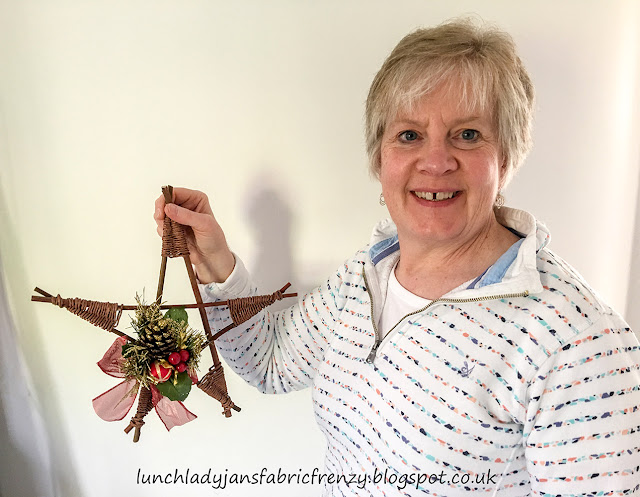 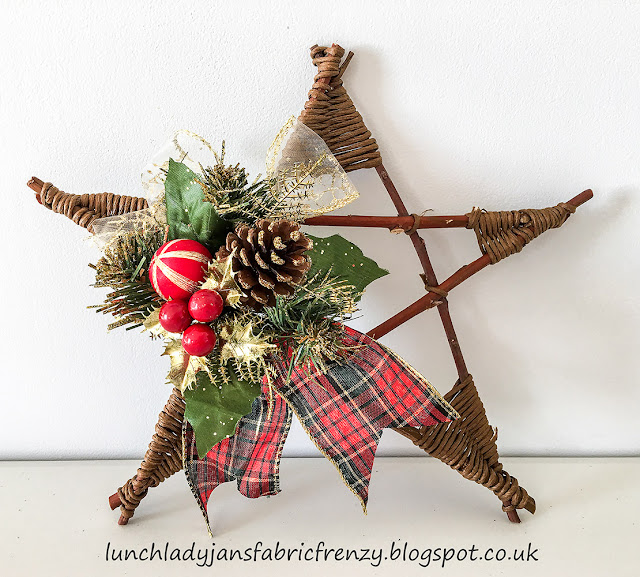 My attempt!  I enjoyed the weaving part very much - Janet had found wire covered tape which was much easier than using thin willow and more forgiving on the hands. I shall put that in pride of place amidst my Christmas decorations! 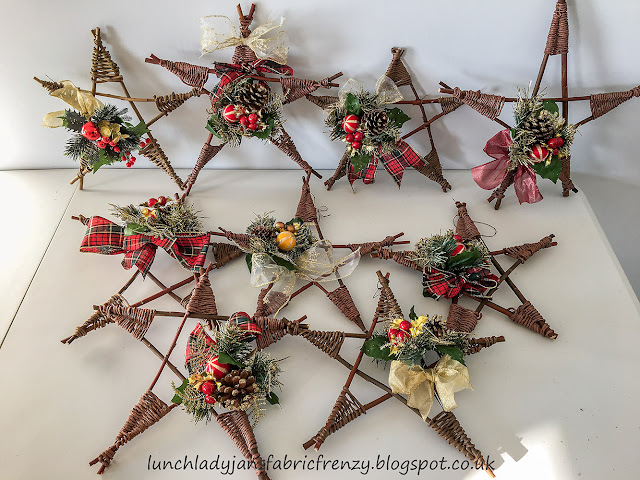 All shapes and sizes and all beautiful :-)

I've been practising making Christmas trees out of paper for recycled Table centres for the WI Christmas party. They're improving slowly! 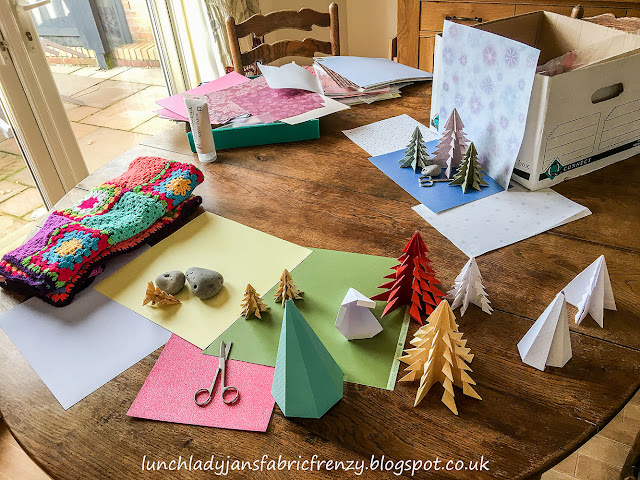 So my desk was the dining room table this time - I was ploughing away and G came in and said Aha! His 52 week challenge topic was Rock Paper Scissors and so we did this: 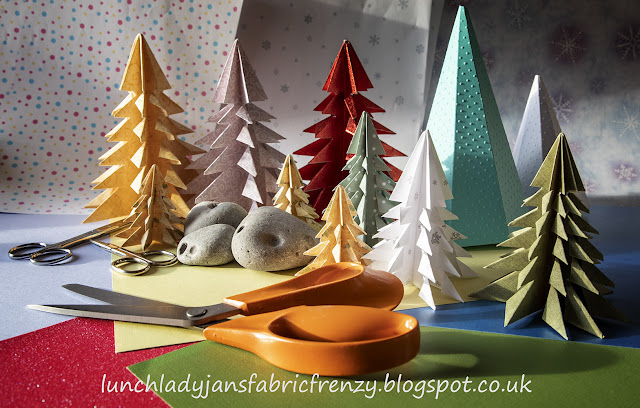 Fun eh? The little stones with holes in came from the beach near Craster in Northumberland years ago when we lived up there. We have a little bowl of them and they've been with us for 3 decades! 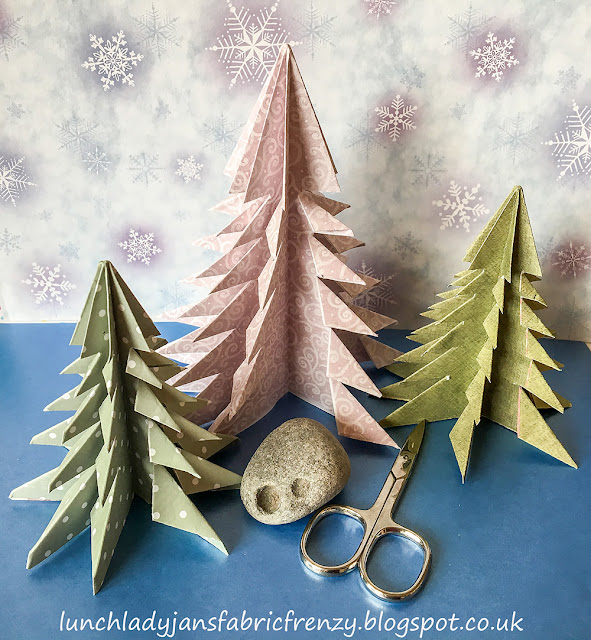 I don't know which one G used for the challenge in the end but  Gail, if you're reading this, then you might recognise some of the papers you passed onto me!!

On the table is also this: 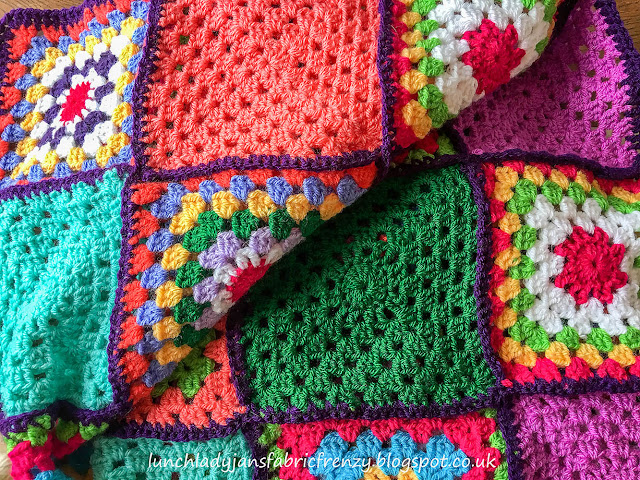 I've been joining squares the girls in the WI have made to make a baby blanket for a Salvation Army Food Bank appeal that Cindy mentioned on FB.

And lastly, a fun little project that I've been doing for my own satisfaction and which will end up hanging in the house somewhere - only a little detail of the fabrics though: 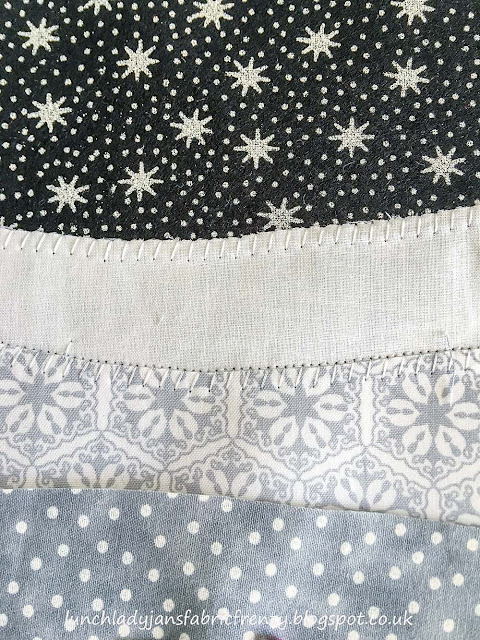 Right that's it, I'm off playing carols with a small group in an old folks' home this afternoon so my comments may very well be later or tomorrow.

Have a lovely crafty week everyone!

IT AIN'T WHAT YOU DO, IT'S THE WAY THAT YOU DO IT AND THAT'S WHAT GETS RESULTS While I was pootling around in the JanCave last w... 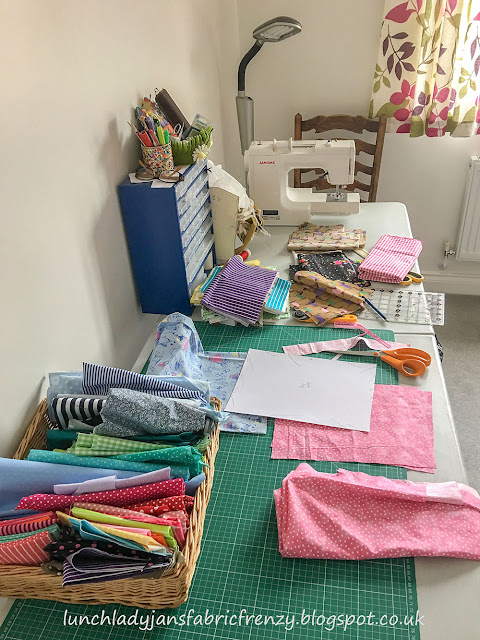