I've chosen the Welsh national anthem as my song lyric this week because I took part in a very special occasion this week...more later! 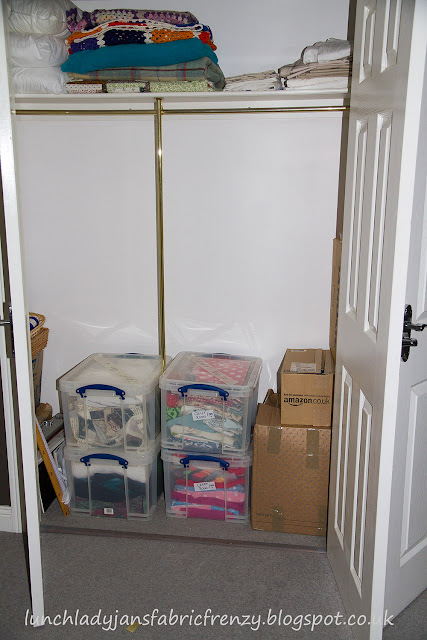 Well, the stash is sorted and packed away in the Jan Cave wardrobe..the worktable is clearer and my sewing machine is out of its box - so a start has been made! 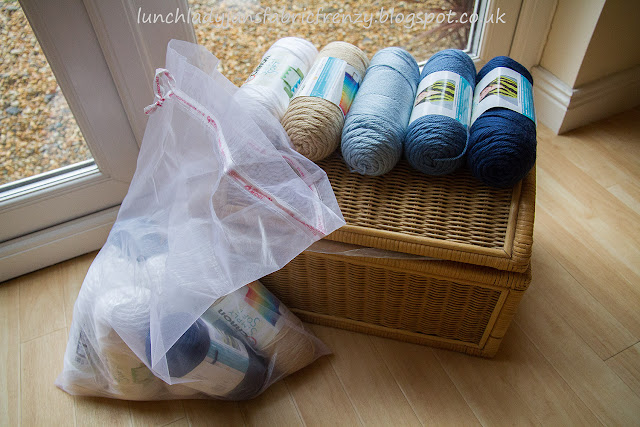 I had an online voucher for the Wool Warehouse, so finally got round to spending it and got this very soft Caron cotton, enough to crochet a beach-inspired throw. I like the way the balls are wound up, very different. But there's been an awful lot of this going on! We hired the wallpaper steamer stripper and it's been worth every penny.  Bye bye, barcode wallpaper - hooray :-D

However, the thing that took up most of my time this weekend was something rather different (apologies to friends who have seen all this already on FB). I was invited to be part of the all female brass band playing at Cardiff before the Women's Six Nations rugby match. It was absolutely freezing on the day but a great experience. 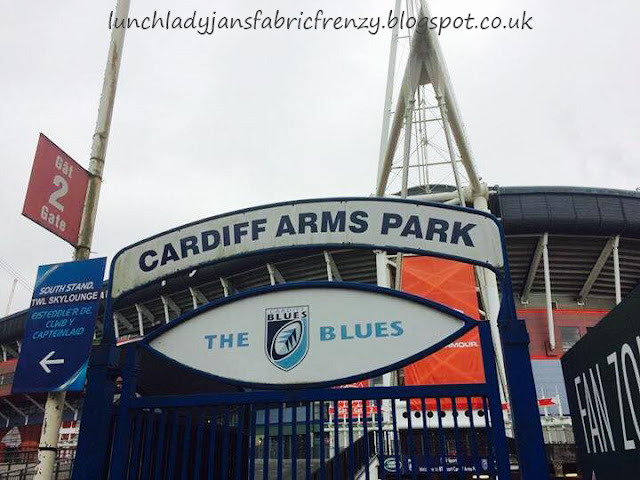 Arriving at the stadium, waiting for the other players to turn up. 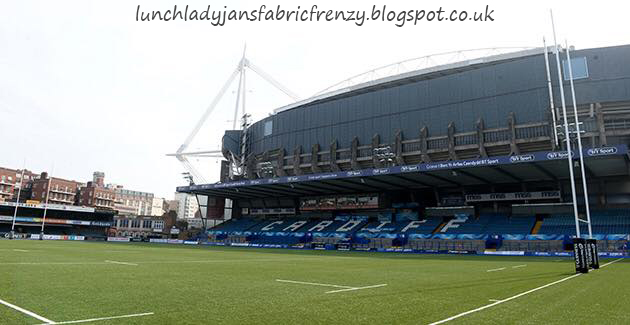 I think this may be the largest venue at which I've played!! 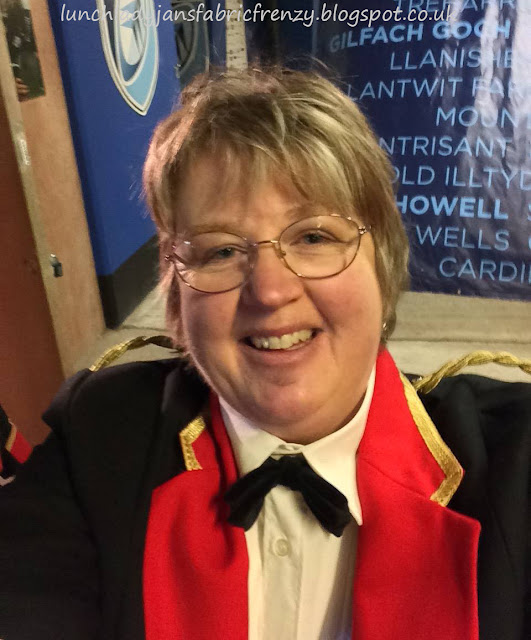 We rehearsed with the 100 strong choir in the tunnel under the stands...my teeth are chattering because it was so cold!

Can you tell where I am? Lolol!  After the teams lined up, we played both national anthems....

You can listen here - it's just someone's phone recording, but it gives you a sense of what it was like to be there. It was an amazing feeling listening to a whole stand of people singing at you!

You can just see me peeking through at the back!  These players were seriously good, it was a privilege to play with them. I'll never forget it.

Thanks for staying to the end - I'll try and show some crafting next week, honest!
at February 15, 2017

Despite the cold, what an absolute honour for you - it sounded fantastic (it's a beautiful anthem anyway, even without a hint of Welsh blood in me) and it is great to see some full band shots! Love the way the Jan Cave is developing. Helen # ??

Way to go! As Helen said,what an honour and lovely opportunity. I too like the Welsh Anthem and am not Welsh, (Scottish, Irish,German and of course English!). You didn't like the bar code wallpaper?....!!!! Glad you are getting your space sorted. Have fun!

How fabulous. That's one of those events you don't forget. Glad you are settling in
Lynn // 13 xx

So glad your creative space is getting sorted....you will soon make it your own.
As for the band playing....I'm just so proud of you my friend but you will have to let me know how I should address you when we visit.....ma'am, your lady ship??? 😂😂😂
Hope you have a fab week.
Hugs,
Annie x #15

So it did get lost, so here we go again (from memory and that is a mean feat these days!!) oh forget the crafting this week and thanks for the Welsh singing and music, am listening and reminiscing of days long since past when I sang all those songs in primary school in The Mumbles. Calon Lan, Bread of Heaven too what a lovely recording. Thanks for the memories, BJ#1

How wonderful t be playing at that match.Bet you got a serious case of goosebumps!I would have. I am so happy your Jan Cave is getting organised. Stripping wallpaper is the pits.We haven't had wall paper for 17 years, although I am tempted with the new gorgeous ones around. Have a happy week Jan.
Thanks for your visit. I am going to have to learn how to bind loose leaf papers as doing journaling etc in pre-bound books is just not going to work for me.That will be the new thing I learn this week!

Your Jan cave will be a fab space to play! Well done on braving the cold at the rugby - what an experience! xx

Sixth head from the right? What an honour! Seems like you have really settled in and this move is going to be the start of a complete new chapter. Well done you - shows what talent you have.
Love the balls of wool, great way to be wound round, looks so good.
Nice to see Gordon doing his stripping - as long as the photos are only of him stripping wallpaper.
Love the fact that you are so settled already.
Lots of Love
Neet 12 xx

What an amazing experience and honour. That's one stadium I haven't been to although the Millenium Stadium is impressive. Happy WOYWW and good luck with the decorating. Sarah #25

Lovely that you've already found another band to play with! I've spotted you in the line-up - not in the previous picture though, LOL! Those built-in wardrobes are so useful! I've got mine jam packed with stuff from top to bottom. Love the colourway of your new yarn - perfect for a seaside theme indeed! Happy WOYWW! zsuzsa #23

Hiya Jan, good to see the Jan cave coming together. Been following your stripping exploits on Fb, rofl! Fab pictures of the Rugby venue Jan, how fab was that, and you've only just moved there!Uniform looks fab. Agree, we are two very lucky ladies. Love and hugs to you both, Shaz XxXxXx

Will you play with the ladies band now?

it i lovely to see your joy at such a fab event ( and the double vision is really no prob as it's nice to see it on the big screen instead of FB which I do on the phone) - really well done you, and I am very envious of your wool stash, I emptied some cartons yesterday and found my PoGo (you don't jump up and down with it its for printing) and was well chuffed - moving is such a good time to actually take stock of all the stash eh? dx #24

That cotton yarn looks lovely - super colours.
What a fabulous event to be involved in (even if it was cold LOL). Certainly a memory to treasure.
Toni xx

Glad to see things are coming together and you're settling in. That yarn is very soft. I've just started out knitting and already have too much yarn - there are so many beautiful colours and some of it feels really nice lol. I am determined to use what I have before buying any more! My goal is to cut down on stash all round this year.

The band playing sounds like a lot of fun! Cold, but fun. Glad to see a couple of photos of you.

Fiona@Staring at the Sea said...

What a fantastic thing to have been a part of. An honour and a thrill I should think, despite the cold.

Hi Jan, I'm listening to the recording as we speak and it's fabulous - despite the quality - stirring stuff. You should be very proud of yourself - it looked freezing. Looks as though you are getting settled into your craft room and progress is being made elsewhere too. The colours of the wool are lovely - lovely coastal colours - and, like you, I like the new shape of the 'balls'. Hope you have a good week. Hugs, Elizabeth x #35

What a great experience! And look how quickly you have settled in to your new community! I know I could never have done it that fast! Thanks for sharing, Lindart #40

Wow! How cool to play for the Match! What a stadium! And how cool not to be looking at all those stripes, I think they would drive me batty. Hope your room comes together quickly so we can see your creations again!
Carol N #34

Hello LLJ! What a very cool (pardon the pun)experience - playing in that massive stadium. Great job.
Ok. I did say I unpacked the last three boxes, but that might be misleading. I have "decorative" boxes and vintage suitcases full of stuff. Tee hee. It's a long time in the works!

I like the looks of the stripped wallpaper, but go it must! Glad you are settling in to your new home.

I see you are happily settling in your lovely new house! And the crafty stuff is coming out too! I saw your report on the pre - rugby concert on FB but I think it must have been amazing playing there! Well done!
Could you email me your address?
Lots of hugs,
CARDARIAN

Happy WOYWW. How satisfying to get rid of that wallpaper. I love the look of that wool too - very soft. Very exciting to play in Cardiff. The atmosphere must have been very overwhelming. Always makes me cry! I have never had any interest in rugby (despite my BIL being a coach for the England team), but after 13 years of living in Wales (and living with a Welsh man who doesn't like rugby - probably the only one!!) I suddenly had an urge to watch this last game. No idea what was happening - but did enjoy shouting at the tv! Ali x #26

My Hubby follows the rugby and I try to maintain my interest but usually find an excuse to go and craft. I am wondering whether this was televised. Thanks for the visit to mine and happy woyww, Angela x 17

Congratulations! It must have been really exciting to play at the Rugby game. Blessings!

So awesome! Thanks for sharing. Dorlene #43

Wow, an amazing experience and now you are part of women's rugby history. Well done LLJ. Can't wait to see how you decorate your unpapered walls. Steaming off the paper looks quite satisfying.
sandra de @8

ooo CONGRATULATIONS!! Hubby is welsh and we actually watched the match - yes the womens as well as the mens :) ( Well he did, I listened while i was creating )Thanks for your comment earlier in the week and sorry I am SO late in getting round to commenting . soojay 21 xx

Congrats on the honor! You must have a beautiful voice. I see the new digs are coming together. Loving the wallpaper. I left you a note about the yarn in an email. Creative Blessings! Kelly

I put the video on my facebook - well impressive. Plus I absolutely adore the welsh language. I quite like that barcode wall paper, how long was it up for? The wool looks really soft. Are you using it next? Thanks for sharing - EmbroidRage #6 x

So sorry missed your post. Gosh what an honour to play the National ANthems before the match. Did you stay to watch the match or were you so cold you went home. Looking forward to seeing the new decorating when you've finished. Can't say I like the bar code paper.

PAPA'S GOT A BRAND NEW BAG.... I hope that Storm Dennis passed you by and didn't inflict too much damage - the gales were horre... 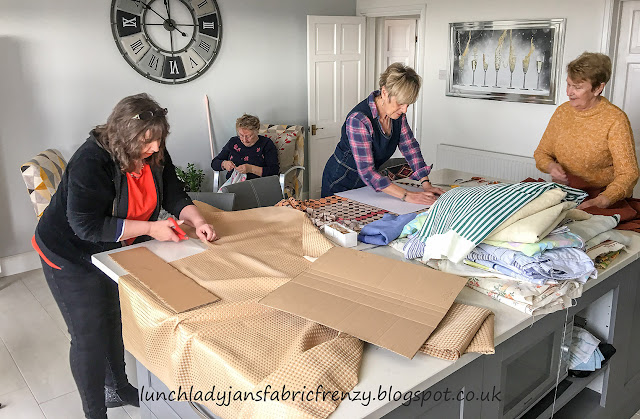