WE WERE SAILING, SAILING, HEADED WHO KNOWS WHERE
AND NOW THOUGH WE'RE ALL HERE, WE'RE NOT ALL THERE....
(Muppet Treasure Island, suggestion courtesy of Rhys!)

Do you realise the WOYWW Crop 2018 is three weeks this Saturday? Blimey, that's come around quickly, I'd better get my act in order and sort a few things out!  I'm really looking forward to meeting up with some of you lovely folks and catching up on all the goss. G has been updating our photos on t'computer and only yesterday showed me the first ever crop in Burbage...quite a lot has happened since then. I still miss Janet Fairythoughts but wouldn't she be thrilled that we're all still friends and joining up to this bloggy-desky madness.

I've been pottering in the JanCave again this week: 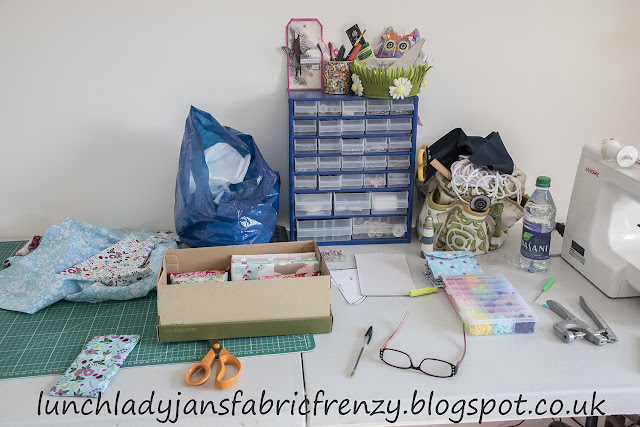 Having bought some fat quarters from Hobbycraft recently (they were on a good offer) I had a go at making little coin purses. The instructions with the new snap popper kits were useless so a quick tutorial on YouTube got me sorted. 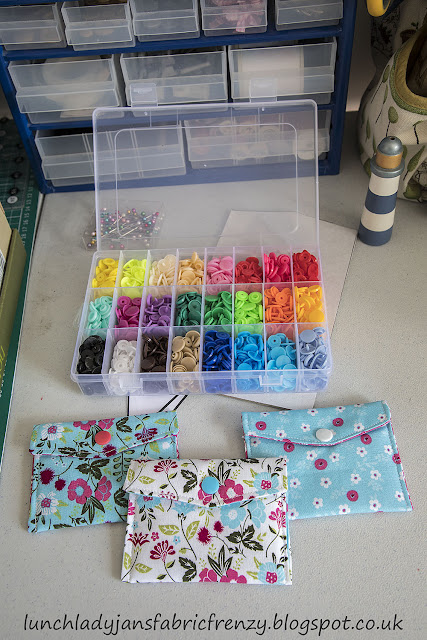 The purses are lined with a contrasting fabric and took less than ten minutes to make. I'm trying to think of small items to sell for the RNLI. The local group have to raise £40,000 this year as their contribution to the new boathouse/shop/offices down the harbour - every little helps as they say. The little lighthouse (top right) is a wooden lightpull, someone made it for the shop team to sell but as it's not official merchandise, they have to be by donation instead. So I got one for the Crop Raffle!

The fat quarter selection is rather lovely: 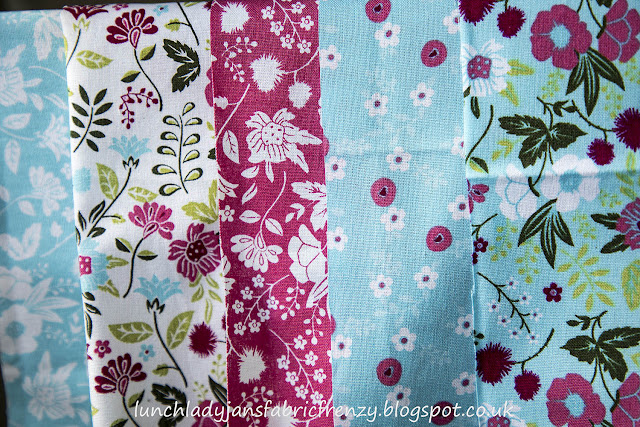 The patterns aren't too big so the fabrics are useful for smaller projects: 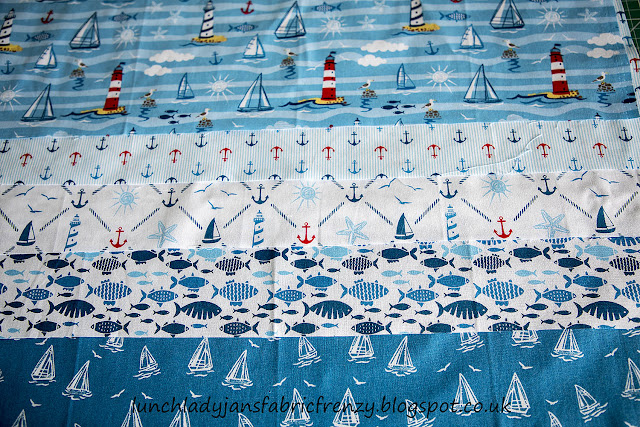 And I just HAD to get this combo - I'm thinking dog bandannas, bibs, PE bags - anything nautical goes well around here! 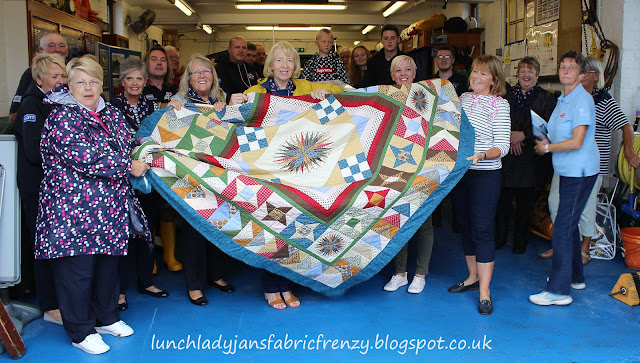 This quilt was made and donated to the RNLI station by Jean, the lady in the striped top on the RH side holding the quilt - she and other ladies from the North Curry Quilting Group in Somerset completed it together with the express aim of raising funds for the station. Jean's family were from the area and the RNLI had helped them in the past. The lady with the very cropped blonde hair (behind the quilt) is from Liverpool - she has raised £14,000 over the past few years after the Burry Port crew helped save her teenage son from drowning.

It's an inspirational group to be part of and you can see why I'm making items for the fundraising. There were 26 call outs in July alone - it's the third busiest station in Wales - and all run by volunteers from the boat crew to the cake makers.

Have a great week everyone!

good luck with your fund raising; it is a very worthy cause, and what a lot of call outs they have! Loving the fabrics, no wonder you had to indulge. Very sorry i can't get to the crop - sometimes not driving is a pain! Helen #??

Always a worthy purchase when helping to raising money for such a well deserved cause. Love those coin purses and the idea Doggy bandannas brings a smile to my face.
Looking forward to hearing what you cropper's get up to, it will soon be here.
Thanks for sharing WOYWW have a super week.
Tracey #5

Beautiful fabric collections ..... love the small purses.
What an amazing quilt! and such happy smiley faces! Cheered me up no end.... have a brill week
Christine #08

You know how to make me smile Jan....I love your fabrics and the little purses should sell well. Really hope they raise lots of money for the worthy cause. Looking forward to catching up soon.
Hugs,
Annie x #11

Awww that's so lovely. Fundraising is such a wonderful way to help out. The coin purses are adorable!
Ellie #10

Good luck with your fundraising. Love the fabrics you got and the coin purses are so cute.

The nautical fabrics are fab.

That quilt is beautiful.

How wonderful! The RNLI are simply remarkable - a favourite charity! Good luck with the fundraising.
Happy WOYWW :)
Claire no. 1

WOW...so much goodness with volunteering to raise money for special events. Just a gorgeous quilt and lots of fun to be had with the group. I love your pretty fabric and colorful coin purses. Truly where does this time go? August is half over and I had one calendar yet to be turned. Schools start here next week. Have a great WOYWW kind of day Jan.

Hiya Jan, first off, thanks for the cards, gorgeous, they were. Doug is particularly in love with his dragon. :) The little purses are fab, and isn't that quilt magnificent? Sort of annoys me that things like the lifeboats and Air Ambulances are funded by donations- they really should be getting money something like the Lottery on a regular basis! Wow, 3 weeks? I need to get my stuff sorted, I think then. Looking forward to seeing everyone. Love and hugs to you all, Shaz XxXxXx

Naughty Jan-4 packs of FQs fell into my basket and will be delivered next week. Seriously Jan, I couldn’t believe my eyes when I saw that seaside fabruc. I’ve been looking for some for weeks. It’s for a young friend whose Dad has a boat and she is making boaty themed things for him. Santa is bringing her a sewing machine and this will add perfectly to the gift. Your makes as always are ace and I like the lightpull very much.

Gorgeous quilt a real smasher! Anyone would be pleased to win that. Love the box of coloured snappy things too. Wishing you a happy relaxing woyww, Angela x12x

Hope all your fundraising goes wonderfully! And what a gorgeous quilt! Love your little purses and those snap poppers are really cool! Have a great week!
Carol N #21

Your little purses will fly - they are fab. Great choice of fabric there too Jan - especially the nautical. Good luck with the fund raising. xx Jo

To be a part of such a lively and interesting community is a genuine blessing - as I am sure you already know. Delightful.
Happy WOYWW !
Rose #28

My post just disappeared! Start again! Gorgeous quilt! I am envious of all of you across the pond getting together for the WOYWW crop! :) Happy WOYWW! #22

Jan, those purses are fun but I think they would take me more than 10 minutes to make. Really good charity RNLI.
Cheers
Chris #2

Happy WOYWW. That quilt is amazing. Your local lifeboat station is certainly busy. It is very unlikely that I will get to the crop. You obviously understand how difficult it is to travel from South to North Wales. Rich seems to be almost fully booked for September with various cycling events (he is taking full advantage of being semi-retired), and our 4th grandchild is still to arrive (was due last Friday). Ali x #16

Hi Jan, I wasn't able to participate yesterday but I just had to pop in to see what you've been up to this week. I just love your little purses and they are sure to be popular. I suspect all the lifeboat stations have been very busy during the heatwave - people just want to cool down but are not always as careful as they should be. Those are really pretty fabrics and I particularly like the nautical themed collection - I suspect even folk who live nowhere near the sea are more than happy to have their wee doggies sporting bandanas made from it. Alan has been keeping the countdown to the crop ... I think he is looking forward to it as much as we are so see you in just over 2 weeks time ... now to think about what I'm going to take for the raffle this year! Hugs, Elizabeth xx

What a stunning quilt, and your little purses are fabulous - the little poppers look very professional - they sure beat the little metal press-studs that I sewed onto absolutely everything when I was a gal! I'm sure they'll fly, and for a very worthy cause too. Sorry I'm late getting round - it's been a bit hectic the last few days.
Hope you have a great week,
Hugs, Diana xx
Bye the way Yupo paper is a strong, non-porous plastic-like paper with a glossy finish that you can use solvent based inks on!

Wow! What a great quilt. So beautiful and colorful. Awesome. Your little purses are adorable. You always make great things. I really need to sew more. Happy belated WOYWW Dorlene #26

Jan, your post this week is a delight. Such fabulous eye candy in every shot, and so inspiring, all the efforts by you and the other ladies, fundraising for the RNLI! Such a worthy cause... I adore the fat quarter fabrics with the nautical theme. I just love anything to do with the sea. Your little purses are adorable, and the coloured poppers a real rainbow splash of colour. I wish I could bottle it all up! You really inspire me with your skill with the needle. I hope you have a wonderful time at the crop. Such a shame that it’s so far from where we are - how I’d love to get together with you all.

Thank you for your fun comment, and I’m glad my little shepherd made you laugh! Yes, my kitchen is a bit like a science lab these days. My Kombucha is now a week old and looks ready for 2nd fermentation so that’s a task for today, as well as starting this weekend’s sourdough. I am having a lot of fun with the fermentation - I love learning new things and this is so beneficial for one’s health, too.

I'm not much into flower-patterns myself but the nautical ones: LOVe those!! Thanks for your visit to my blog earlier this week, happy belated woyww, have a great day! Hug from Holland, Marit #20

Love those nautical patterns Jan. I was tempted into some fat quarter purchases in Aldi recently, so I just need some patterns now so that I can use them. Love the little purses, they should go well for fundraising. Happy belated WOYWW. Sarah #19

Hi Jan! I love the little coin purses! I want one to hold my sweetener in my purse! Lots of little uses, I bet! What would we do without Google and You Tube? How did we ever manage before? LOL! Have a wonderful week, and thanks for your visit!

Good morning, Jan! Wow.. what an inspiring group. That quilt is gorgeous. Your fabric selections are very pretty. I'm thinking 10 minutes for someone who sews routinely. Would take me a while to get in the sewing flow again. Creative Blessings! Kelly #27 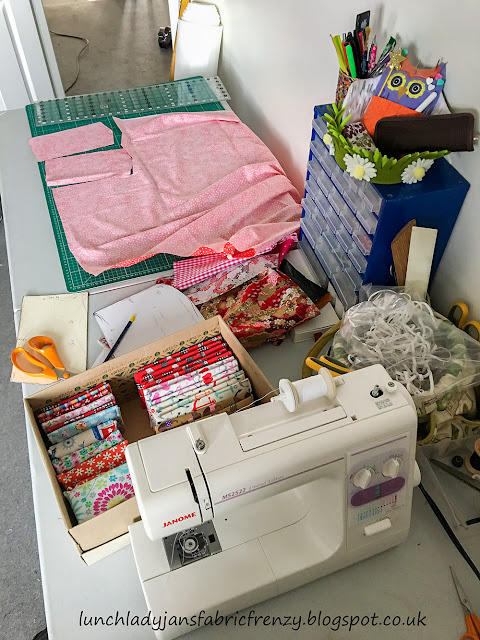