It's so short and sweet this week, it's positively supersonic strawberry (first thing that came into my head, don't ask why....) I've just realised as well, that this is my 400th post. Blimey, all that tomfoolery, friends past and present and the odd bit of crafting. I suspect there may be more....... ;-) 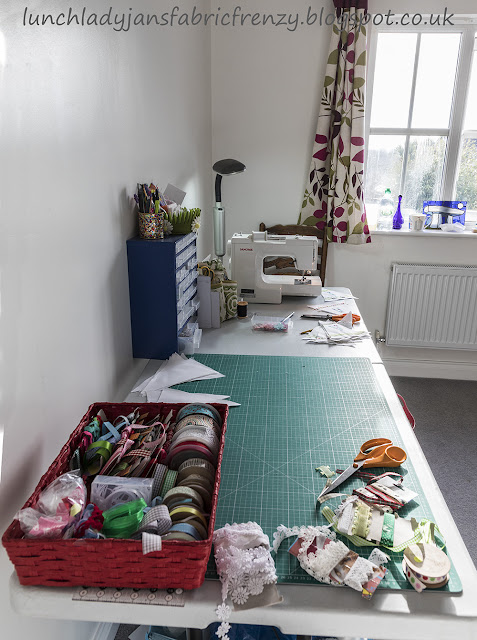 Triangles of fabric and the ribbon box - yep, it can only mean one thing....Bikini time!! Nah, only kidding.... 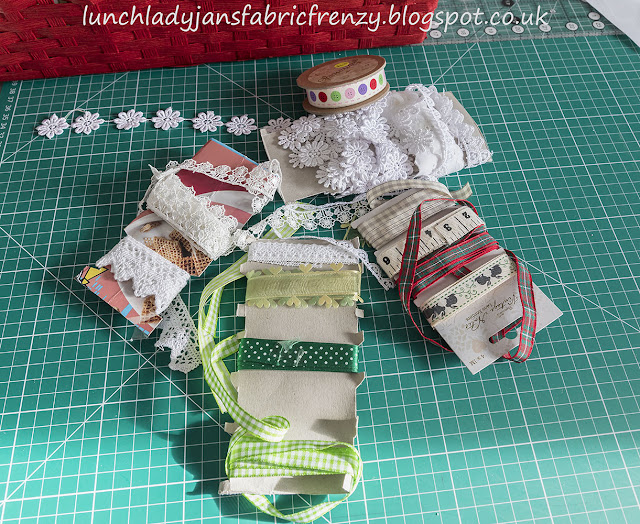 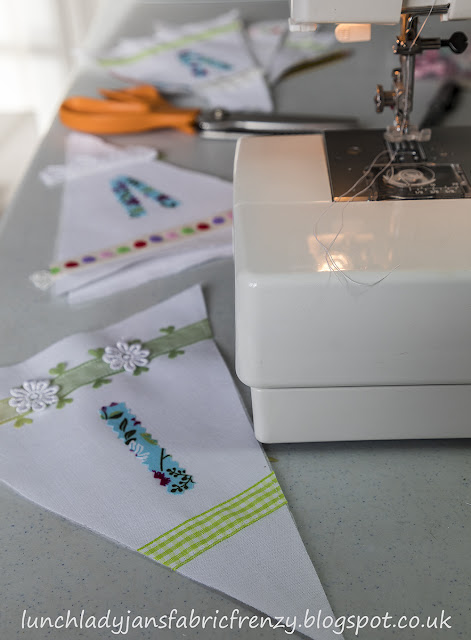 Given free rein with the colours, my instinct told me to go apple green and cherry pink and Springtime. I can't show you the end result cos I'm still only halfway through! 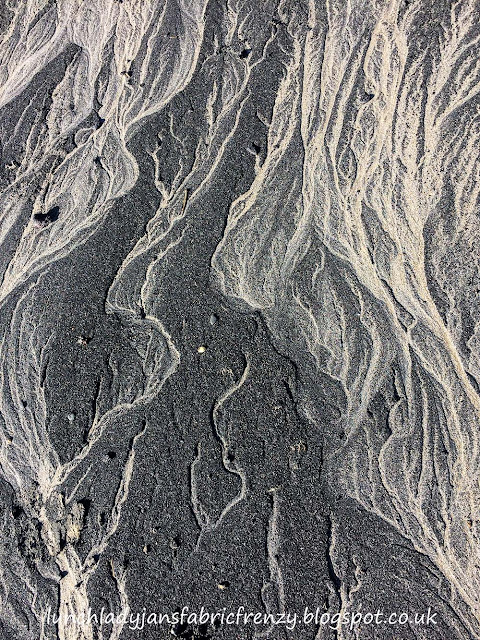 There is a lot of coal dust in one area of the beach which washes out onto the sand - then the sea plays with it and creates some really interesting patterns. Honestly, if you'd seen the looks from some of the other folks when I was taking this...but I knew you'd appreciate it! 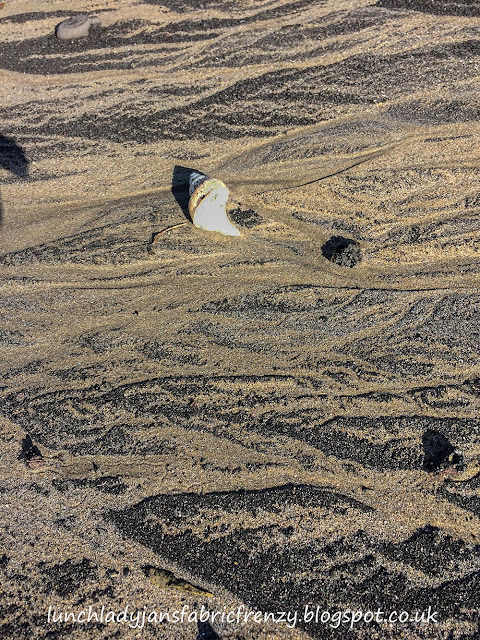 If it wasn't for that bleached out shell, you'd think it was a lunar surface huh?

IF A PICTURE PAINTS A THOUSAND WORDS...

Well, I'm getting there bit by bit - though I wasn't able to speak after band practise on Tuesday, I was so puffed out! The weather has been so lovely though, we've been out trying to walk a little longer each time.

No crafting in the JanCave this week but I did host the WI Craft group again: 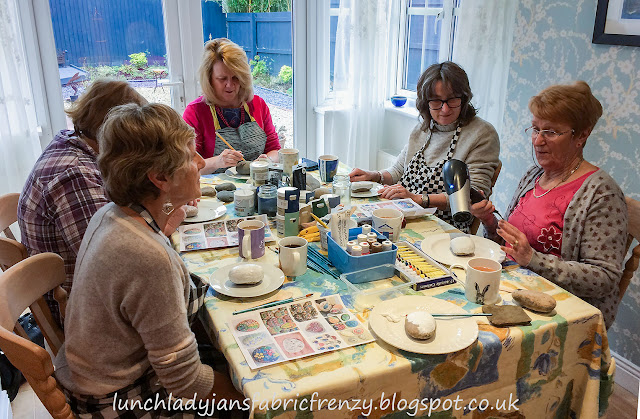 We were painting rocks with acrylic paint - the results will be varnished and hidden in various parts of the UK as part of the Burry Port Rocks campaign. Judith (in the checked apron) was a schoolfriend of mine - we got in touch recently after last seeing each other many. many years ago (40...!!) This was her first event and I think she really enjoyed. We don't normally blowdry rocks but it was the quickest way of setting the background colour quickly! 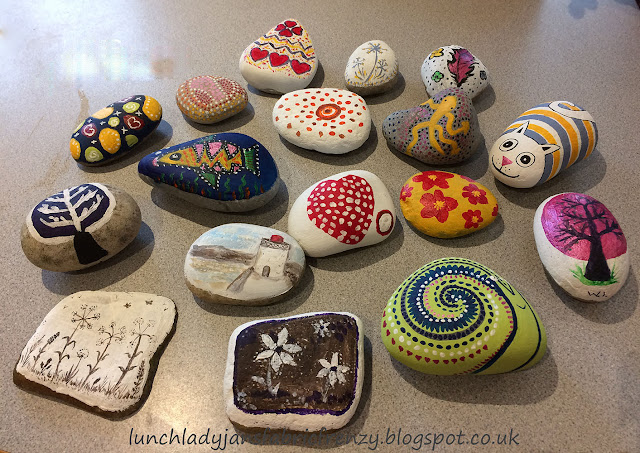 How varied can you be?! It was really good fun and I enjoyed painting the rocks far more than I'd anticipated. Now to hide them all.......

I was bought some daffs recently and they were looking so lovely on my kitchen table, I thought I'd get the watercolours out. 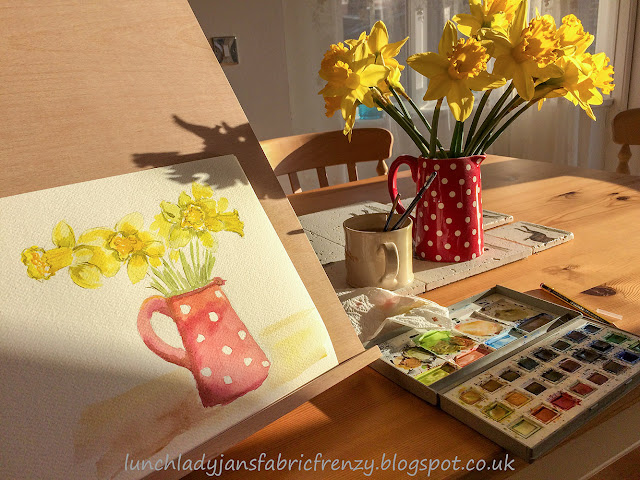 I had great fun but am very much out of practise...watercolour is a hard medium to crack. Still, I enjoyed doing it and that's the main thing huh?

A couple of pics from our beach walk on Monday (just cos I know you like seeing them!) 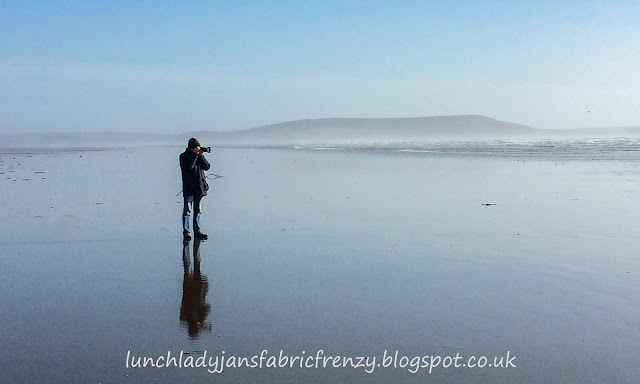 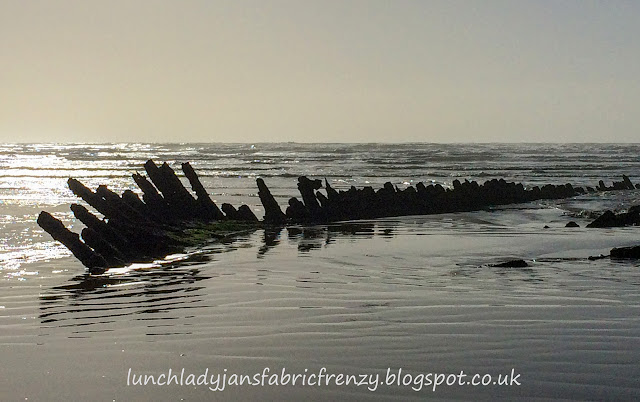 The wreck being swallowed up by the incoming tide.... 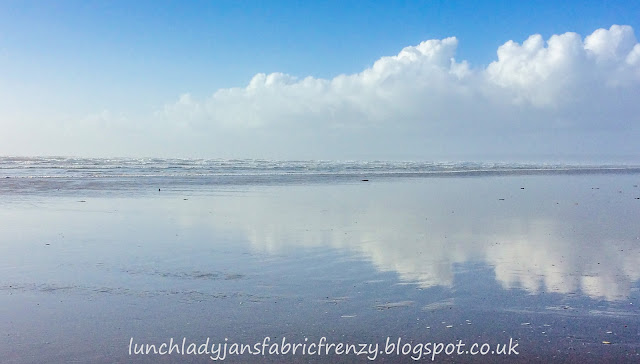 Weird to see reflections on a beach eh? These were all taken on my camera phone... 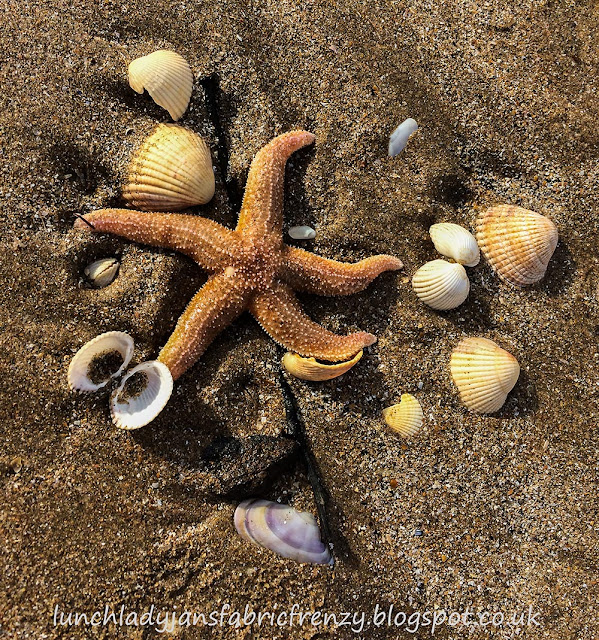 A little seaside vignette, nothing was rearranged, that's exactly how we found it. It's always interesting to see what's been washed up by the tide!

Much as these little Sanderlings were doing in the shallow edges of the incoming tide: 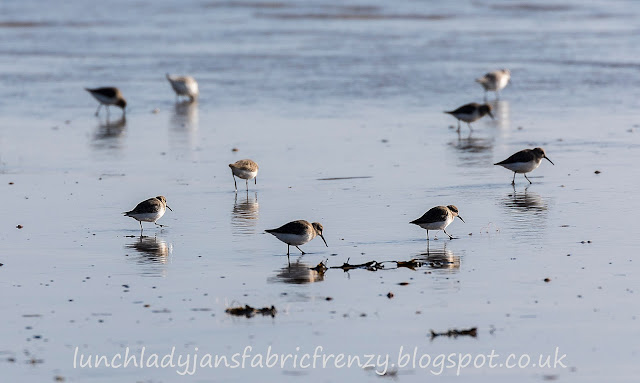 They scurry along as if they've been wound up by clockwork - absolutely hilarious to watch - but they're demons at winkling out tasty treats from the sand. Clever things!

Hopefully I'll have a bit more crafting to share next week but the weather promises to continue fair so I'm going to get out and walk as much as I can!  Hope you all have a good week too!

This blooming bug has lingered on and I have continued to feel quite grim but hopefully am getting there now. I've made a couple more things in the past couple of days so must be feeling a bit more springlike! 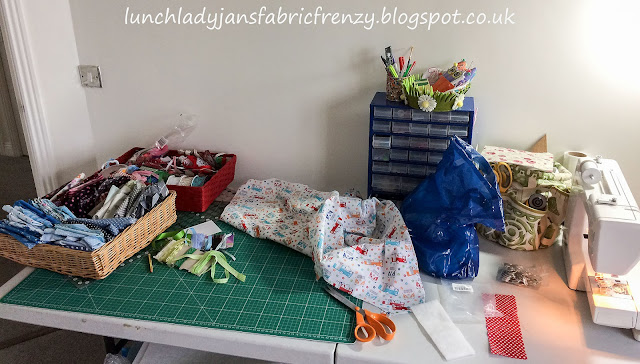 Things have been selling well down at the Harbour Lights Cafe, which is great. The tissue holders aren't so popular so I thought I'd try something else. I'd made myself a fabric keyring a while back and friends had admired it so I thought I'd bust some scraps! 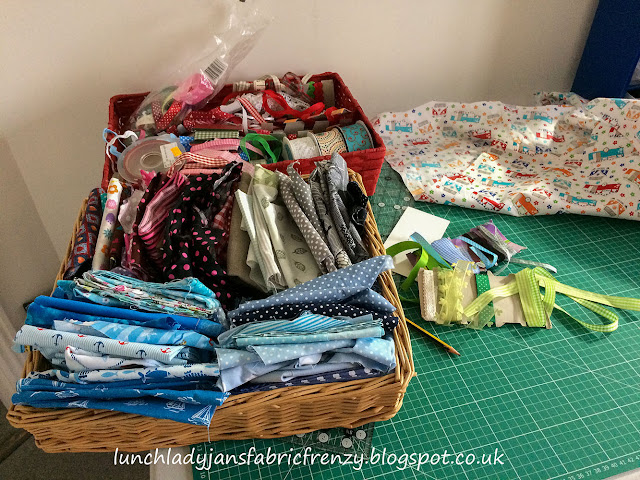 I did have a little sort out first as it was a right tip! 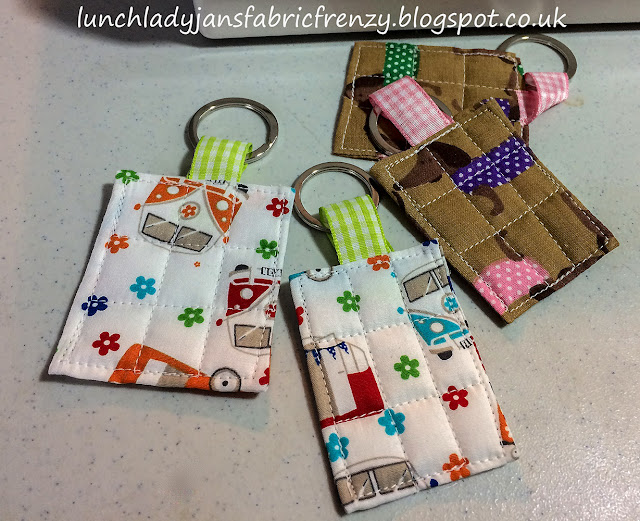 Tiny bits of offcut fusible fleece acts as a thin layer of stuffing (it's too expensive to just bin the small bits so they've been kept stashed in a bag), odds and ends of ribbon and some split rings that were bought for this purpose. They look quite nice but I thought a bit of packaging was necessary to make them look a bit more worth the money! 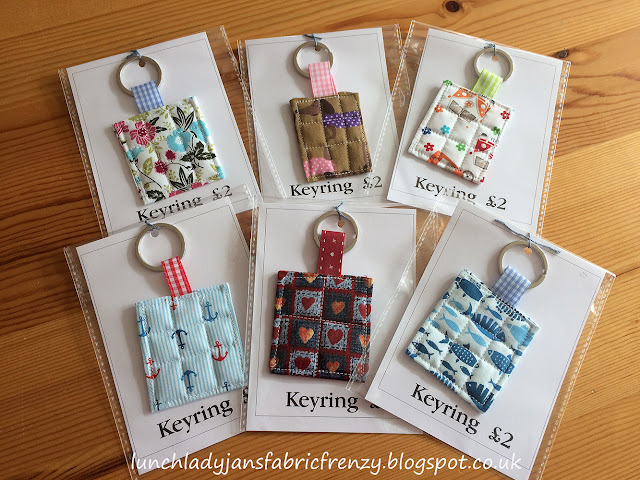 It keeps them tidier in the baskets in the caff too. Hope they sell when the caff reopens in a couple of weeks' time.

I know that a few of you are enjoying seeing G's photos...well, he uses the JanCave quite a bit as there's good light in there. I'm called upon to help, not only with the staging but ideas too. The latest competition was Still Life and G thought he'd use that small bottle of whiskey I was given recently.

So, hunt out a bit of tartan, ask for a loan of our son's Letter Opener (a dagger!), the brooch I wore for Burn's Night, then there's all the lighting jiggery pokery... 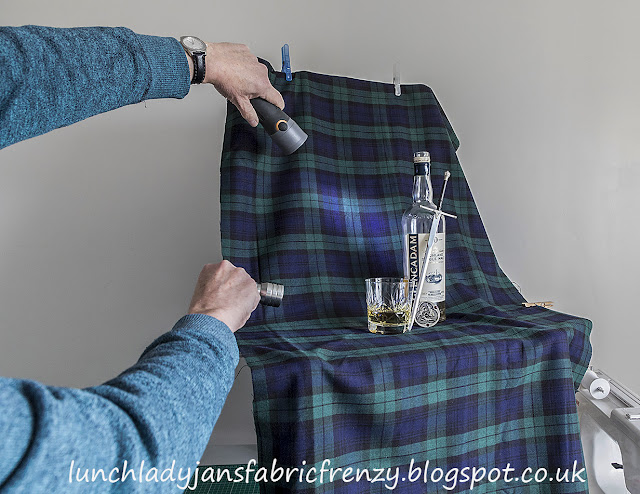 Just experimenting with lighting slashes across the tartan but also highlighting the whisky tumbler... 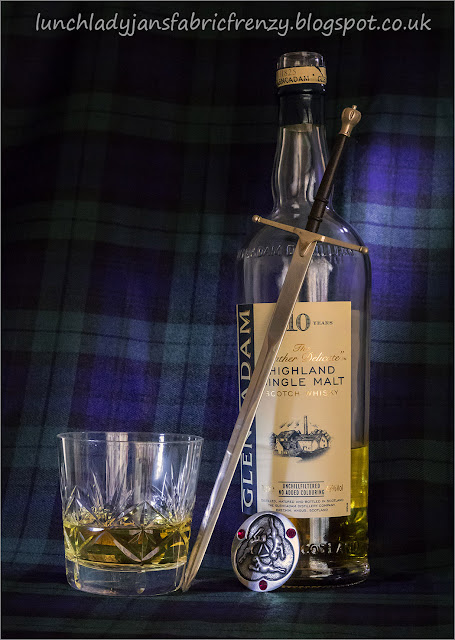 Again, no idea if this will tickle the judge's fancy but we had fun setting it up!

Oh boy, have I had a humdinger of a cold this past week - thought I'd got away with it this winter but my sneezes have registered at 6.5 on the Richter scale, lol! I'm not feeling sorry for myself, just explaining why there's been virtually no crafting apart from knitting...

However, I have been on the receiving end of two gorgeous deskers' even gorgeouser crafting! 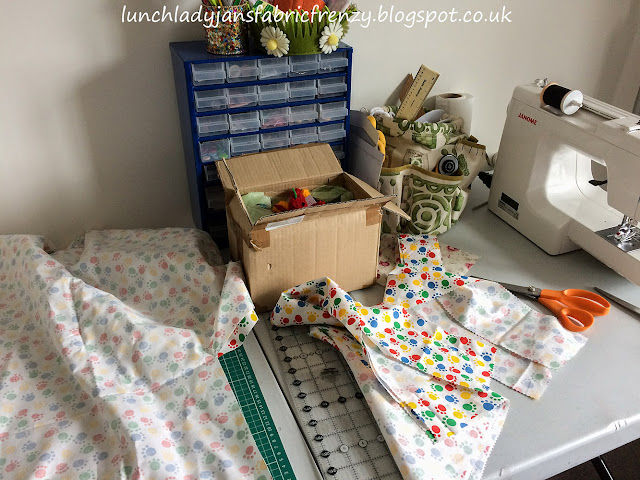 The paw print fabric is still out as I tried to get some more cutting done but just wasn't in the mood. The little box is Exhibit No1, m'Lud: 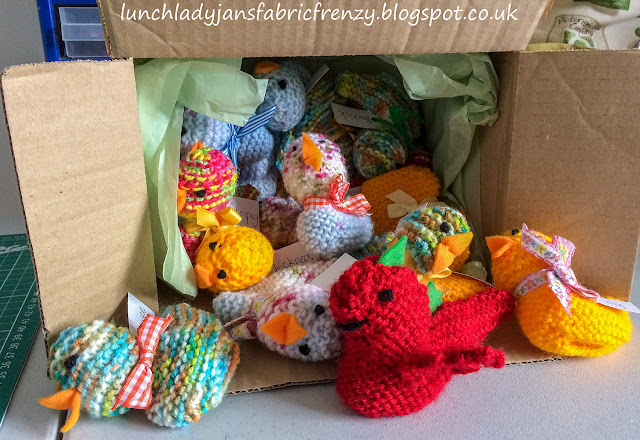 A box full of knitted loveliness - how could those little chicks not make you smile?! From the talented and rather wonderful Twiglet, who sent me them to raise funds for the RNLI. I love the way all the chicks have been named and are different colours. The odd one out, of course, is the little Red Dragon at the front who held a little choccy egg for me. I love him Twiglet, he makes me smile a lot! 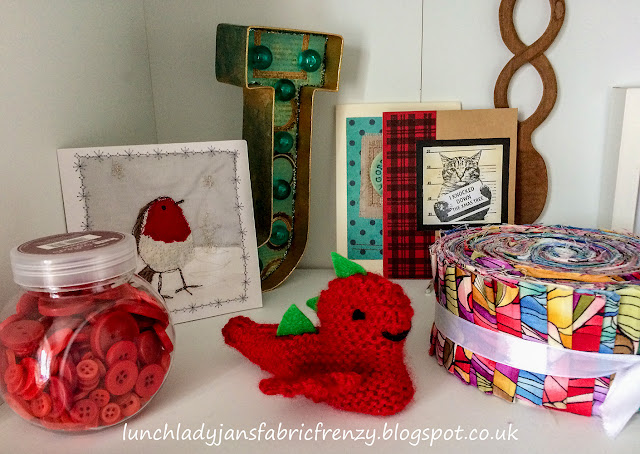 He's taken pride of place in my Rogue's Gallery :-D 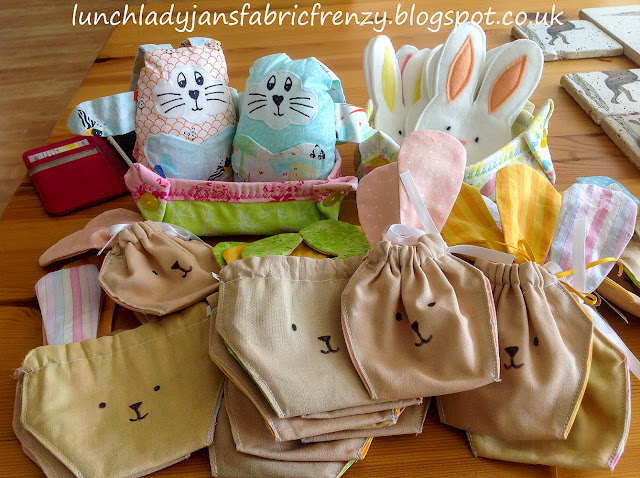 And Wipso (MUCH younger sister of Twiglet!) sent me these Easter goodies also for fund raising. Lovely little bunny bags just right for putting small choccy eggs in plus felt bunnies and fabric baskets - all amazing and beautifully made. Well, you wouldn't expect anything else from Annie, she's a sewing magician!

G has also been sorting out more photos for various competitions over the year and has decided to go outside the box (aiming for Zero or Hero) I like this one very much: 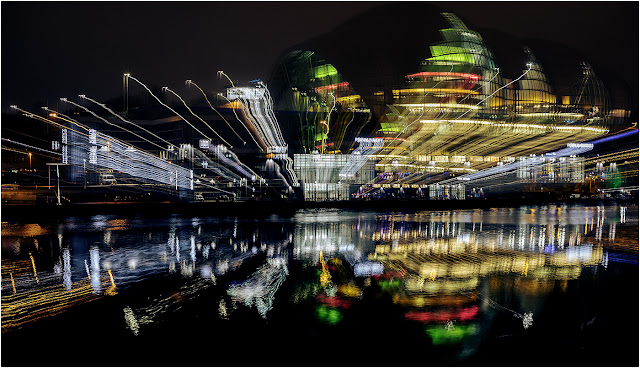 It's the Sage Music venue in Gateshead reflected in the River Tyne. You can never tell how a judge is going to react so you may as well enter something that pleases yourself! Wouldn't it make a fiendish jigsaw?!

ALL KINDS OF EVERYTHING REMIND ME OF YOU.... Do you find that the time is whooshing past? It was going quickly before the lockdown but ... 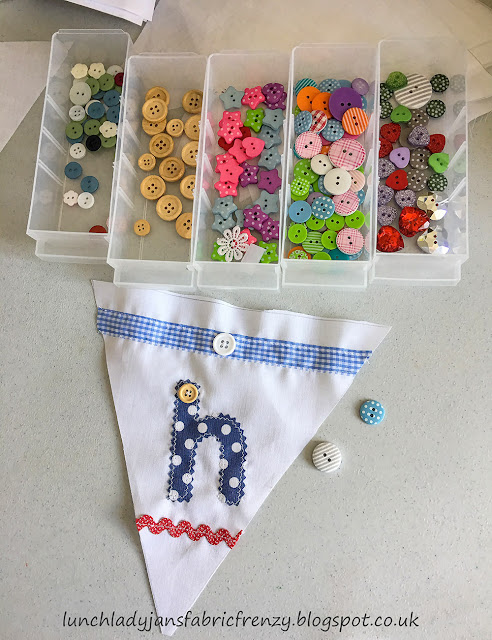