Well, it's done and I've moved in! 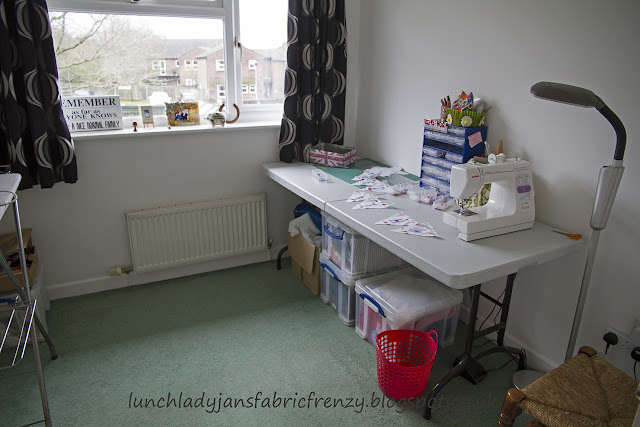 All freshly painted and ready for action! I like my sewing machine to be at the end of the table, because it doesn't bounce around so much (and the sockets are down that end too) 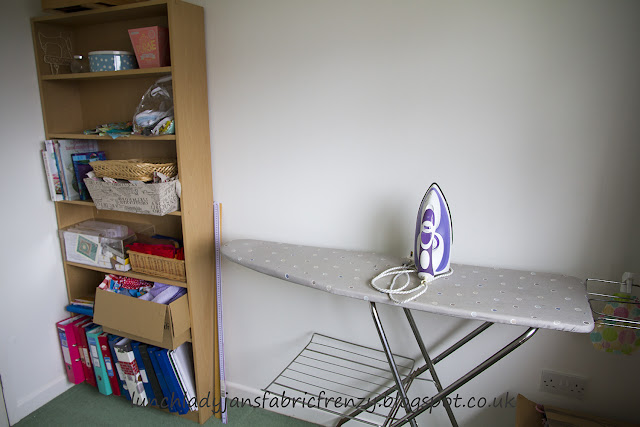 On the opposite wall is the ironing board plus the bookshelves..... 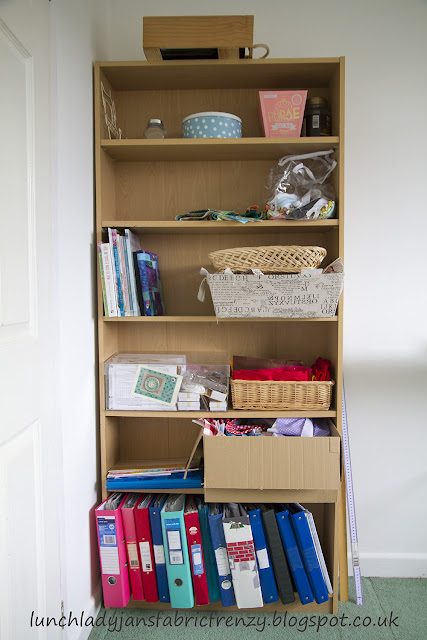 At last there's a place for my boxes of scraps, sewing books, tin of dried lavender etc etc....plus some house files. Well, they had to go somewhere...!

It's quite interesting - I always thought I had a huge stash but actually, I'm quite minimalistic now I come to see it all arranged like this. I need to get my cork board on one wall - that's where I keep ATCs, cards and other favourite bits of stuff that friends send. 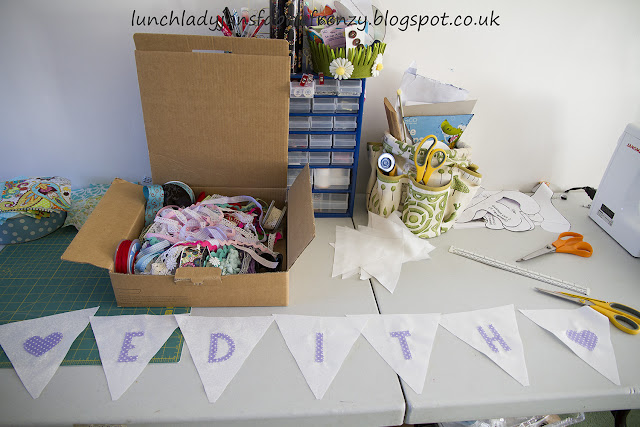 And the desk has already seen a bit of action...my new great niece arrived last Wednesday. Her arrival came very fast - so much so that my niece's partner, who is part of the amateur acting groups that are part of the Shakespeare 400th anniversary tour. had to leave his role as Flute in A MIdsummer Night's Dream at the RSC in Stratford upon Avon after the first act! Luckily there was an understudy on standby. The Director of the RSC went front of stage just before the second act to explain why there'd been a change of cast and the reason why....this got a huge round of applause!!  So the arrival of Edith Hettie Molly Skinner made it onto the BBC news.  I think she's destined for a life on the stage with a start like that :-) 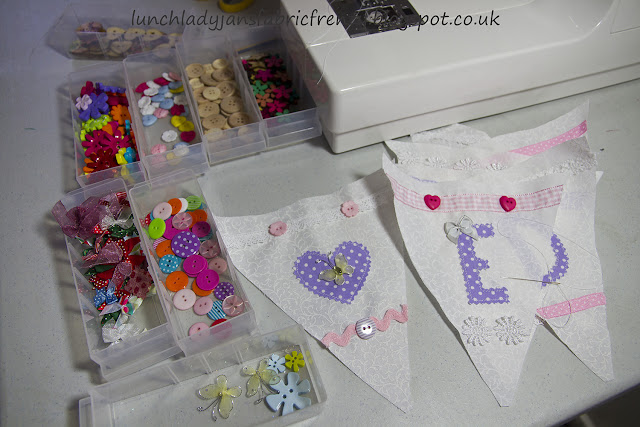 Lots of pretty buttons and bows...... 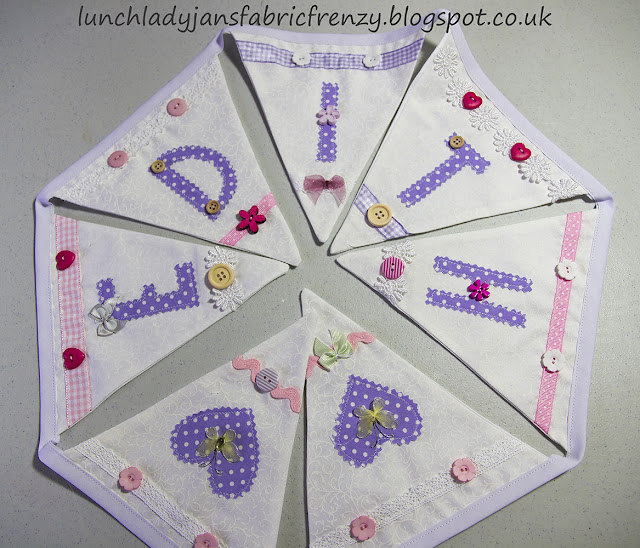 Fit for the first girl to be born on our side of the family since her mum arrived thirty years ago....it's been all boys up to now!  Yay, I can buy pink....woohoo!!!

...this is the reason for the song title today: 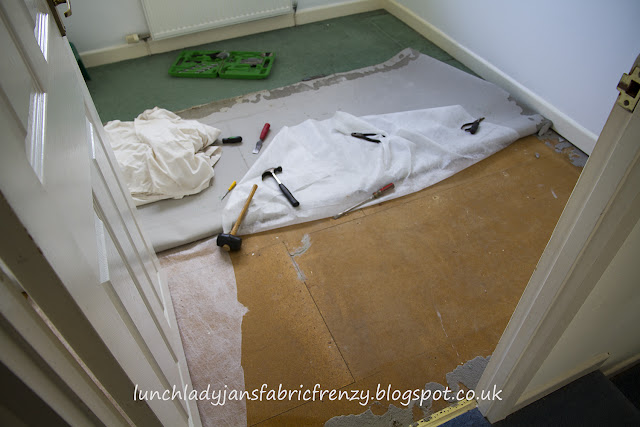 The walls have been filled and painted but G had to do some serious floor fixing before we could make a start on the woodwork. The Jan-Cave is progressing little by little :-)

I don't seem to have had much hwyl (Welsh word for gumption - pronounced hoil) for the crafting recently.  I can't seem to settle to anything sewing wise. And then I found the remains of a charm pack (plus other similar squares I'd cut from fat quarters) lurking in a bag under my worktable. 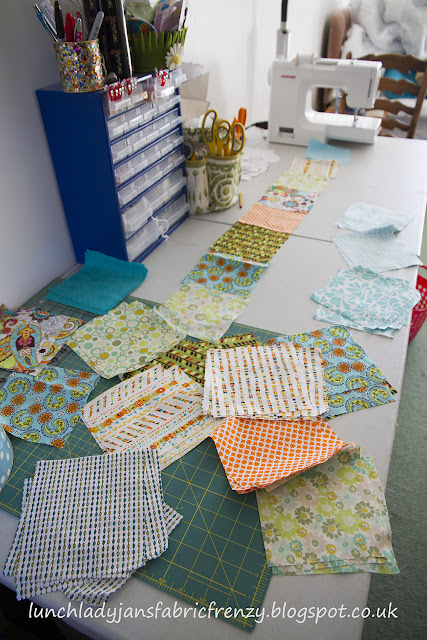 So I'm just doing some mindless patchwork - the colours are all sorted, it's just a question of 1/4 inch seams. Easy on the brain :-) 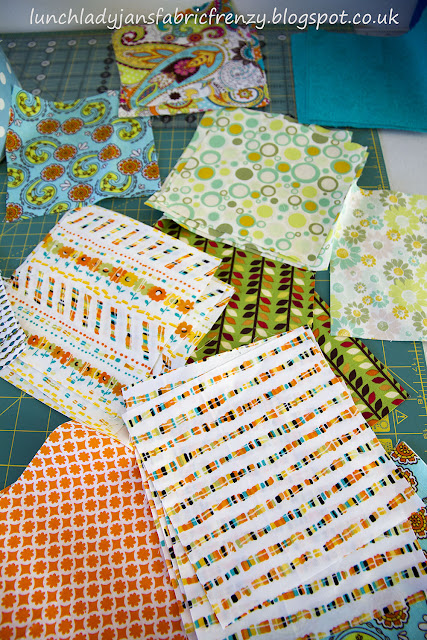 There's some old favourites in there! The green with autumn leaves on is from a  fat quarter I've had since the dawn of time, the paler green circles and flowers were from a fat q pack from Fabricland and the two bright squares at the back were from a selection of Happy Mail fabric that Kay 505Whimsy Girl sent me. Lots of lovely memories there!

I'm going to send this. plus the items pictured below to an outreach charity based in North Wales. I've sent stuff to them previously but received an email from the organiser asking if I was still interested in donating. They've asked the UK Handknitting website if they can be mentioned on their charity link but apparently are considered too small a group to be featured!! This made me a bit cross.  So if any of you would like to make something knitted, crocheted or quilty, then email me for info. 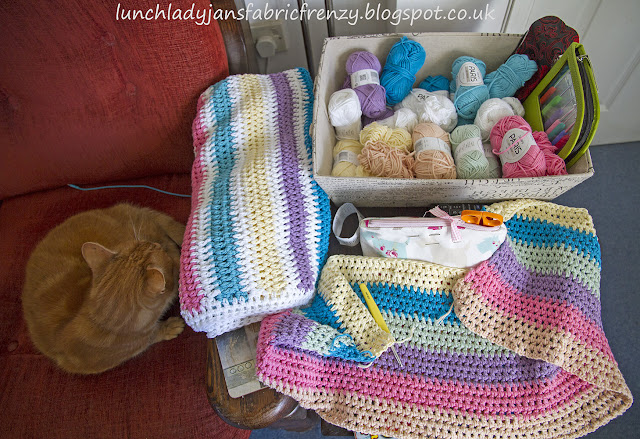 Last week's blanket is finished and I'm making another to finish off this blasted splitty yarn. I'm not doing complicated hooking, just need it to be over and done with ASAP!  Ron is showing admirable restraint, don't you think, in resisting the urge to curl up on all that softness?!

TURN AND FACE THE STRANGE,
CH-CH-CHANGES

It has been a crazy week!  Moving my son and his fiancee into their new flat took up quite a bit of time (and energy...I'm not as young as I used to be!) plus going to a concert and...well, you get the picture. 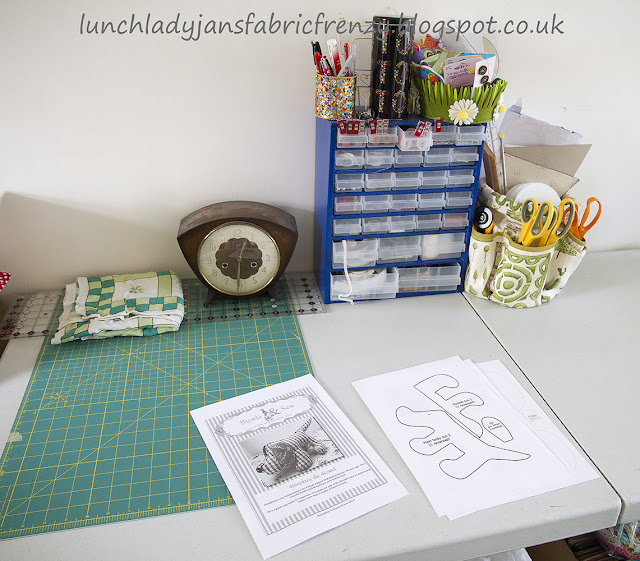 Except for a freebie pattern downloaded from the Bustle and Sew website. I'm going to make a pooch pin cushion. That's a first for me!  I still haven't moved the clock from my desk - I'm not entirely sure how it ended up there. Probably when we were sorting out stuff for Owen's move!  The vintage tablecloth was used to wrap up something fragile when we cleared my parents' bungalow. I'm just wondering how I can re-purpose it. 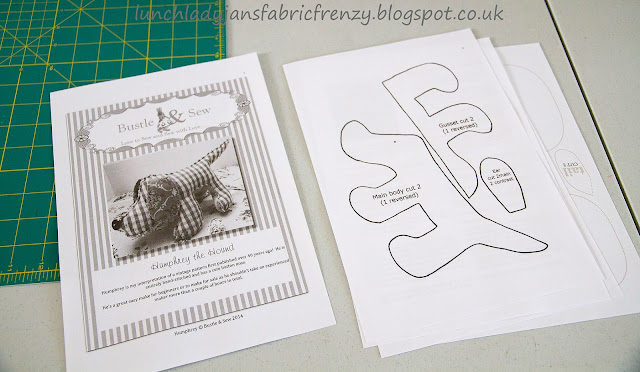 Interestingly, you sew the pieces with their wrong sides together, so you end up with a raised raggy seam. Hmmmm, I'm not sure if my OCD can cope with that. But there's a first time for everything :-)

I have been crocheting away whilst watching TV though. I had some cheapo Drops cotton yarn in my stash and am making a blanket. 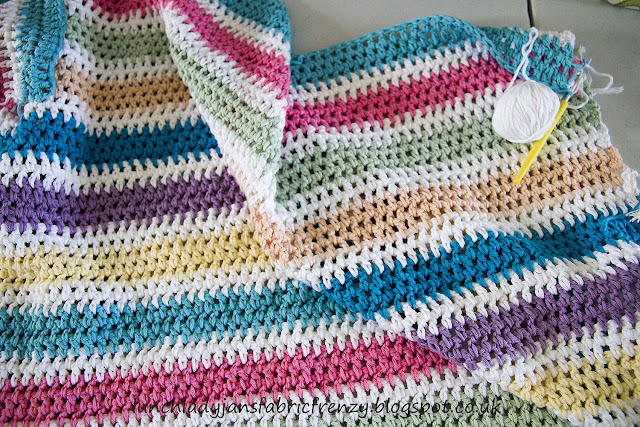 Lovely, fresh colours but the yarn is a b%$£*r to use, it splits like crazy so I'm having to loosen my tension in order to get the hook through.  I'll cobble together some sort of border at the end!

Now when someone leaves home, there's a vacuum in the house, isn't there? It's amazing how much longer a loaf of bread and pint of milk lasts....but the biggest difference is there's now a spare room: My hubby was thinking about it as an office but it would involve a whole lot of computer cable/wireless internet shenanigans and he can't be bothered. So I'm claiming it in the name of Crafting Sisterhood!  My next job is to redecorate (look at that yellowing woodwork - shameful!!) and then move all my stash in. I have warned my hubby that he won't see me much in the future!!! Now, where's my worktable going......?

You know how I've been doing so well and really busting that ol' stash of mine?  And how I wasn't going to buy any more fabric??  Cough...... 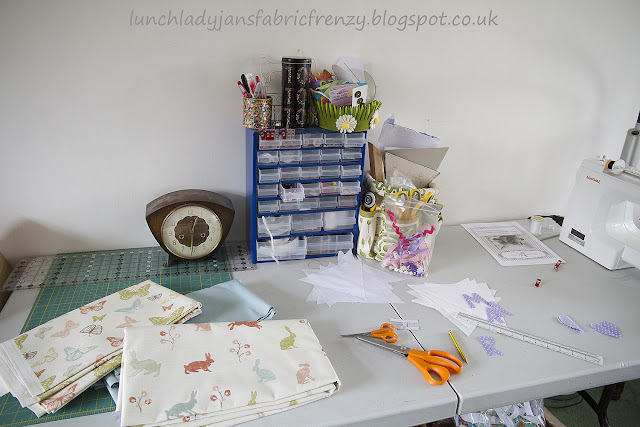 Well, it's own-up time :-)  I was in Winchester visiting my son at uni and just popped in to C&H fabrics to buy some thread (3 km in fact! That's 3x1000m reels) and just thought I'd saunter around the furnishing fabric dept. Bad move! 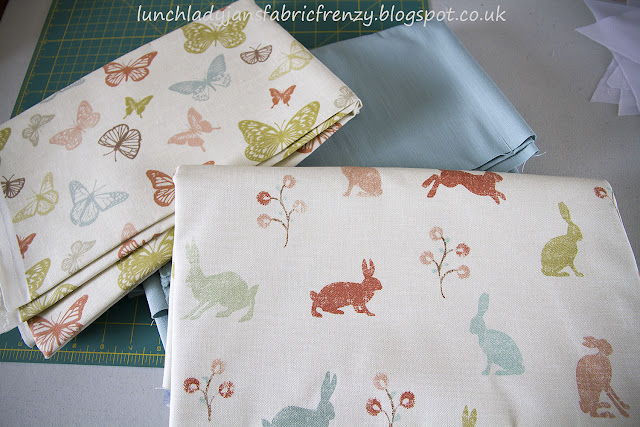 I fell in love with these two new Clarke & Clarke prints - I couldn't choose between the two so got a metre of both!  And when I dumped the roll onto the counter to be measured, there was that duck egg blue fabric already there from a previous customer. The colours just went - it was too serendipitous to ignore, so I got some of that too! Yummy, aren't they? Not quite sure what I'm going to do with them yet.

The other thing you can see on my desk are the makings of some more bunting, for the new granddaughter of some friends in band. 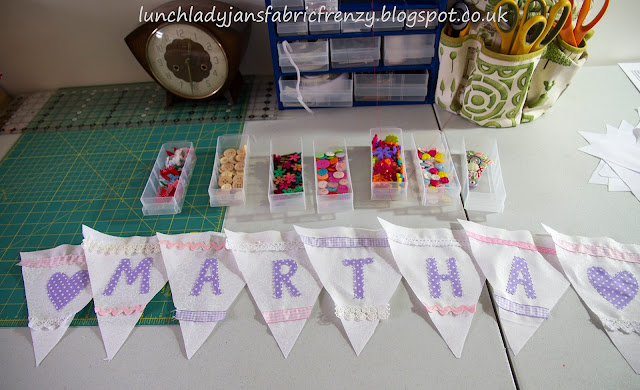 I was just deciding which buttons, bows or butterflies to use...I had a very happy fifteen minutes playing with various options :-) 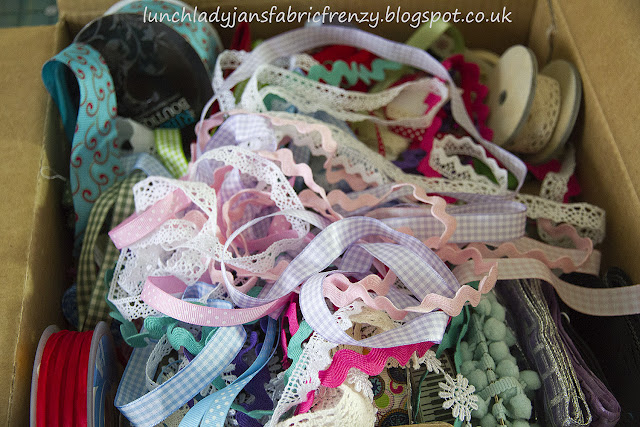 Disgraceful!!  I wonder what the collective noun is for lots of ribbons? A Medusa maybe?!  I think some sorting out is in order :-D

GONNA USE IT UP, GONNA WEAR IT OUT.... Thanks to all who have entered my giveaways, it's been great fun and I've enjoyed it very muc... 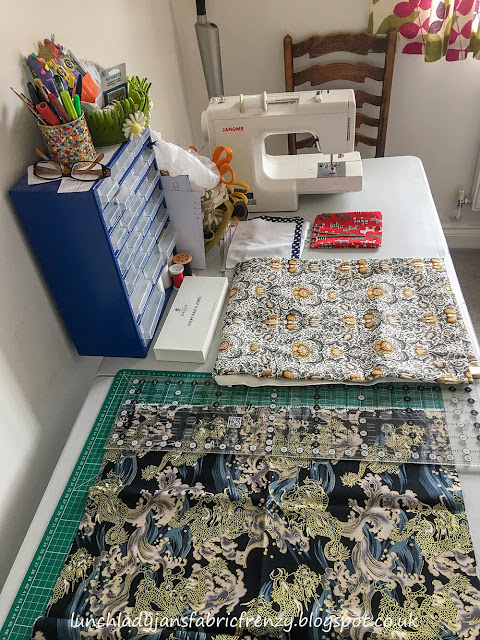